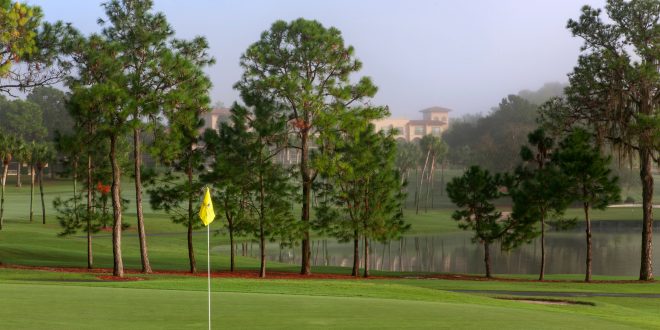 Designed in 1917 by George O’Neil, the track itself isn’t long for these guys at 7,015 yards, a potential plus for Gage Smith, who hits it straight but isn’t a big bomber off the tee.

The best teams, the best players, and, according to Golf Advisor, the best golf course in Florida will all collide on March 9-11 for what will be, without question, Division II Golf’s strongest Super Regional.

Present at Mission Inn Resort & Club’s El Campeón will be the nation’s top three ranked teams in Barry, Lynn, and West Florida,  No. 6 Nova Southeastern, No. 7 Florida Tech, No. 8 Florida Southern, and No. 10 Lincoln Memorial.

The Blazers, despite receiving votes in the Coaches Poll, were not among those teams, but earned their way into the field for the first time since 2013 following a second place finish in their most recent outing at the Gulf South Conference Championship.

To keep their season alive, they will need to finish in the top seven.

“Everyone is upbeat and feels good about our chances of contending for an advancing spot to Nationals,” Coach Jared Purvis said.

Gage Smith, a freshman who played a significant role in getting VSU to this position with his charge at the conference tournament, has never been known to shy away from a challenge.

“I’m looking forward to it,” said the bulldog from LaFayette, Georgia.  “I love the competition and getting to know where we stand with the best teams in the nation.”

Brock Healy, the team’s No. 2 player this year, called it “extremely satisfying” to be on the Blazers’ first Region team in six years.  He said he will head into this event with the same thought process that he did with the Southeastern Collegiate, where many of the nation’s best were also present in Valdosta.

“My approach will be to play like how I played at our home tournament,” the Norcross native said.  “That was a pretty big field, and I played well, so the same mindset can help me.”

Also helping the Blazers could be the experience of Senior Matt Anderson, the three-time All-GSC player, who has played in the past two Super Regionals as an individual.

He also happens to be the only Blazer in the lineup with time spent at this particular course, having played at El Campeón as a freshman in the D2 Super Regional Preview.

In addition to hosting Anderson, the resort has hosted over 20 consecutive years of NCAA Championship events, has held U.S. Open and U.S. Amateur qualifiers, and has been the site of numerous other high profile college and junior tournaments.

The only thing matching it’s pedigree is the layout’s difficulty.

With trouble at every turn, a single misfire could result in a large number on any given hole.  Its tight fairways demand accuracy off the tee, and with sloped, undulating greens, keeping the ball below the hole is a must if one hopes to leave a hole with a rare birdie or save par.

“I feel that this course suits my game because it sounds like this tournament will be a survival of the fittest, and I feel that I can last the longest on a tough course like this,” Healy said.

Designed in 1917 by George O’Neil, the track itself isn’t long for these guys at 7,015 yards, a potential plus for Smith, who hits it straight but isn’t a big bomber off the tee.

“I think it’s great for my golf game because I don’t hit the ball very far, so any course that takes the driver out of the longer players’ hands is an advantage for me,” Smith said.

Notable on the front nine are Hole 4, where the tee requires a shot over water and an uphill, 85-foot elevation change awaits, and No. 7, rated the second most difficult hole, which features a stream that splits the fairway of this 457-yard par 4.

The 8th, while not considered as difficult, may have the most historical value of all the holes on grounds, having been untouched layout-wise for over 100 years.  This island green par 3 has laid its eyes on legends like Ben Hogan and Babe Didrickson-Zaharias.

El Campeón may make its name on the back, however, where the 556-yard par 5 17th is infamously known as “Devil’s Delight.”

Depending on who you ta

lk to, the course’s signature is either interesting, unique, or considered a “bad hole.”

A double dogleg, tall oak trees tighten up the first turn and bunkers left of the fairway only make it more narrow off the tee. From there, a tree in the middle of the fairway and water short of the green forces the players to lay-up off to the right side with less than ideal room, given there is also a massive bunker short of where the water hazard begins.

With only a small strip of land between the water and this sloped green, balls landing on the surface are not automatically safe as it is not unheard of for them to roll back into the lake.

The differing opinions on the 17th’s design partially involve the individual’s take on the antique tree, considered either a clever use of a natural barrier or a strange feature seen as an appendage more so than an accessory.

Devil’s Delight, the 16th before it, and the winding finishing hole make for a treacherous trio to end the round, the collection perhaps having the capability of deciding the golf tournament.

“I’ve heard that these last holes are very bad and goofy, so I will try and play them very smart to ensure no hick-ups,” Healy said.

Both Smith and his roommate Davis Smith think that maintaining focus throughout will be key on a place like this where things can quickly go wrong.

“The course definitely will make you think through every shot,” Davis said.  “And I think that helps me because I believe I’m good at staying level-headed and focusing on every shot.”

In a loaded field such as this one, the Blazers will be underdogs, but the team embraces this role, going back to their first appearance at Columbus, where the trio of freshmen shined in their debut.

It was there where Davis Smith made a triple bogey on his first college hole, went to 4-over, and then proceeded to fight back later on with five birdies to shoot even par.

“I just thought I showed I won’t ever back down and give up,” Smith said.  “No matter what happens, I’m going to keep giving it my all.”

For VSU, how they handle adversity will be important, but a key element to remember prior to the Super Regional’s start will be the momentum created by the Blazers’ last showing.  In the GSC Championship, Anderson came in 2nd with a tournament-low 66, Gage Smith tied the former while completing his second top 10 finish in a row, and Davis Smith, despite leaving some shots out there, demonstrated that he can go low.

The lineup for VSU will be Anderson, Healy, the Smiths, and Sophomore Wesley Hanson.

In terms of individual players, this event certainly doesn’t lack in terms of star power, with five of GolfStat’s top six players in the field.  Those players are, in order, Jorge Garcia of Barry, Juan Jose Guerra of Nova Southeastern, Garcia’s teammate Niclas Weiland, West Florida’s Christian Bosso, my GSC Player of the Year, and Delta State’s Zach Zediker, the coach’s pick for GSC Player of the Year.

Zediker, Sam Jones, Evan Spence, Paul Murphy, Vincent Norrman, Jon Parker, Harry Bolton, and Bryson Boyette will be competing by themselves and not in team play.  Two of these players will advance to the next round of the postseason.

The Blazers have had to take final exams while preparing for this event.

“It’s been stressful, but I think we managed it very well,” Gage said.  “There has been less time to practice, but we have made the most out of it.”

“I feel like our team is strong enough to compete with anyone in this field,” Davis said.  “If we play like we know we can, the sky is the limit.”