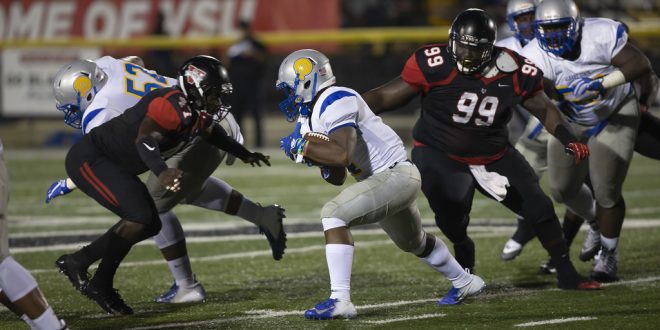 VSU will open the season on the road against Albany State on Sept. 7 at 7 p.m.

The rivalry of VSU and Albany State football runs deep to the bone.

The dictionary describes a rivalry quite literally, as “competition for the same objective or for superiority in the same field.”

But in sports, typically we see a multitude of factors that create a rivalry. For VSU fans, the idea of rival has typically referred to regional factors, like when multiple publications refer to games against Albany State as a non-conference rival. Sure, they’re close, but is this game worthy of being called a rivalry matchup?

VSU head coach Gary Goff, a first-year head coach and former player for the Blazers, shared the view of the definition, as looking at Albany State as a rival.

“It is a rivalry to me,” said Coach Goff. “Back when I played at least, the games with Albany State and West Georgia were always bloodbaths, you always want to get a leg up on either of them.”

In the history of sports, you can generally refer to four different factors to determine rivals: proximity, history, competitiveness and regularity. VSU and Albany State, you can take a deep dive into what the story tells.

For proximity, there is a definite reason for a rivalry. The schools are located just an hour and a half away from each other, and are typically in competition for the same recruits. These factors add a layer to the matchup, as most of the players on each team have likely played each other since high school.

The close proximity always leads to the idea of comparisons, and the idea of having a leg up on each other is what can drive a rivalry matchup.

In terms of history, the history of the match up doesn’t go back for years, but the recent history of the matchup has made it must see TV. The teams have begun to play each other early in the season, and they’ve become an important game to set the tone for each team’s respective season. Coach Goff relayed why it’s an important start to the season.

“The first game is important to go out and play with energy and execute. The emotions of the game will be high and it will be important to stay disciplined and avoid the bad penalties you’ll see in early season rival matchups.”

The most intense games of the series were in 2004, when Albany State beat the Blazers in the regular season, upset at the time, and then VSU came back to beat the Golden Rams in the playoffs.

There’s also back in 2011, when VSU knocked off the sixth ranked Albany State teams 30-27. That was when VSU hit a field goal with three minutes remaining to pull off the upset.

In terms of competitiveness, and this is where the VSU and Albany State game lacks a footing. The last game, the two teams played, VSU crushed Albany State 45-14.

They hold an 18-2 record against Albany State, and for the most part the games have not been close lately. Albany State’s only wins have occurred in 2004 and 2017.

Finally, the VSU and Albany State matchup also checks off the regularity list. As mentioned above, the teams have played 20, but they have made the effort to schedule each other regularly in the non-conference schedule. The teams have played every year since 2014.

Though unconventional, VSU versus Albany State may have lacked in competitiveness over the year, but the proximity of the two schools, the regularity, the history and the desire to excel each other to start the season is what makes the Blazers and Golden Rams a rivalry.