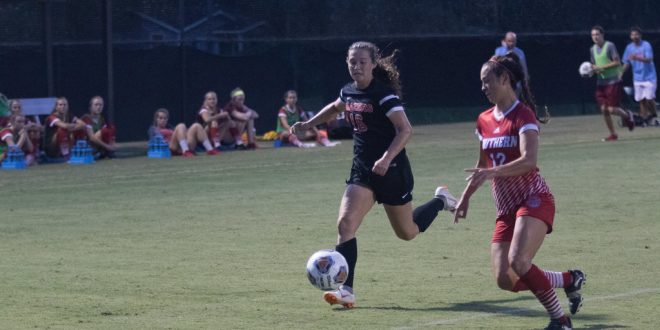 The Blazer’s first home game will be against Clayton State at the VSU Soccer Complex on Sept. 8 at 6 p.m. ET

Preparations for the 2019 season have cast a promising light on the VSU Lady Blazers soccer team.

The Blazers finished the 2018 season 11-7 and 9-4 in the Gulf South Conference under second-year head coach Stephen Andrew.

Fortunately, the Lady Blazers have such strong players on the field that the losses should not affect their performance.

Forward Ashley Lewis became the all-time leading scorer in a season and a career at VSU. She also holds the school record with nine game-winners.

The Lady Blazers began training twice a day on Aug. 14 with their exhibition game four days later. The purpose of exhibition games are for players and coaches to see the speed of the game and experiment with their formations.

“We used a lot of 4-3-3 last year,” Andrew said. “The 4-3-3 is an aggressive formation meant to overwhelm the defense while still allowing for freedom of movement. That will be the base that we will work from this year. We can be really flexible within that system.”

Andrew plans on focusing on defense in the beginning of practices and making sure that the newcomers grasp his system.

“Most players are returning from last season,” he said. “That way we can move through (practices) a little quicker.” Which is good news for the team, as they prepare for the task of qualifying for the GSC Tournament and, ultimately, the Final Four.

The 2019 season will open Sept. 5 at 7 p.m. with a game against Florida Southern in Lakeland, Florida. The Blazer’s first home game will be against Clayton State at the VSU Soccer Complex on Sept. 8 at 6 p.m.