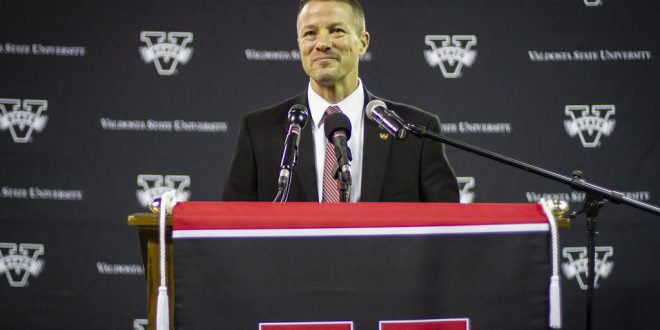 Gary Goff was officially introduced as the Blazers football coach on Jan. 29. He will look to continue the winning ways of VSU, inheriting a perfect 14-0 national championship squad.

Gary Goff has a rich history with Valdosta State.

As a player, he was the team captain and wide receiver, helping the Blazers to their first playoff appearances in 1994 and 1996. During that time, he also learned the framework to a successful coaching career: the air raid offense.

Under the tutelage of some of the best coaches in college football today, Goff learned about the air raid offense. It is an offensive system that prioritizes passing the ball at a high level, usually between 65 to 75 percent of the time.

The air raid emphasizes specific formations and patterns such as crossing routes and trips formations, meant to find space in defensive zone schemes. The scheme also prioritizes a no huddle offense, meant to get to the line of scrimmage quickly and call plays based on how the defense lines up.

“Both of those guys were incredibly successful by sticking to their guns,” Goff said. “They knew what they had and how successful it could be, and it’s really paid dividends for them.”

Leach, in particular,  is known as a trailblazer to college football. His passing attacks are consistently ranked among the best in the country, and a number of his former players and coaches have experienced a great deal of success using his schemes around the country.

Currently, the air raid system has taken division one by storm, with teams in major universities such as USC, UCF, Houston and even the Arizona Cardinals of the NFL coming from the air raid coaching tree, a term for the coaches to come from Mumme and Leach.

After his playing career, Goff took their philosophies to Princeton University, where he was the pass game coordinator and receivers coach.

He then reunited with Mumme at New Mexico State, where Goff was the co-offensive coordinator and receivers coach at one of the most successful offenses in college football.

During Goff’s four years, the team broke 21 school records and was rated as the second best offense in the country.

Now, Goff has become one of the most successful head coaches in Division II of college football. At Tiffin University, he led a remarkable turnaround of the program, as they finished last season with a 9-2 record, setting multiple school records over his tenure.

His offense was consistently one of the best in the country.

“The air raid is the only system I’ve ever used,” he said. “It is a system I’ve always used and is very successful, it will be very similar to a lot of sets the team ran last season. Which is nice because it will make for an easier transition for the team.”

VSU is coming off an undefeated season in which they won a national championship. The Blazers head coach Kerwin Bell took a job as the offensive coordinator at the University of South Florida, paving the way for Goff to return to his alma mater.

“A lot of the guys have commented that specific routes and formations feel very similar to them, so I expect to see many similarities between the two offenses,” Goff said. “Some of the timing patterns have been new, but they’ve done a great job learning and transitioning very well.”

Goff also said that the pay calls feel the same, and that there is a level of comfort with the guys so far, but he understands the circumstances. With a lot of returning players, expectations are sky-high for VSU. Goff said the coaching staff has tried to keep the team on its toes.

“The guys haven’t faced a lot of adversity, so we’ve tried to throw a lot of curveballs out them,” Goff said. “Things like changing practice times, giving more leadership opportunities to other kids, it’s a great chance to keep these guys on their toes for the season.”

VSU opens the season Sept. 7 against Albany State. They’ll look to get their season off on the right foot and play the game coach Goff knows.

“Football is always the same no matter the plays,” Goff said. “Its most important we go out there and play smart, fundamental football, avoid bad penalties and win the turnover battle.”