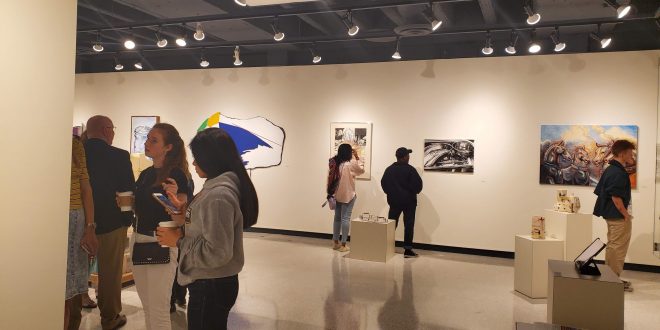 VSU’s Department of Art and Design opened the Faculty Exhibition on Monday, Aug. 26. It was breathtaking. The gallery was filled with family members, faculty, students and professors who all came out to support and take in the artwork.

Jazz melodies by the VSU Faculty Jazz Combo floated and intermixed with little comments on the pieces around the room.

“(‘I’m Sure I’m Sure’ is) my favorite because it’s one of a brand new body of works that I’ve just started maybe six months ago, so I am excited for where the work will go. It’s the most hardest, it was like really hard to make but very exciting

Huges labored 15 hours per week for three weeks to create the piece. She explained that although it looks simple, a lot of it took time to sketch, write, read up on, and research to develop her piece.

Although it looks simple, there was a large amount of work put into the sketching and research.

Another pair of pieces were “pEgg Board” and “Dolorum Decipulum,” both by Richard Peterman.

“The idea actually came from a piece made of paper and it’s kind of a geometric form, believe or not,” Peterman said.

“You start with squares and do the squares and then you draw from the corner’s semicircle that meets in the middle of the sides and then that is folded into little pieces of diamond shapes, then if you take the two of those square and bend them they come together, so as long as you have those vex and concaves that’s the structure. Now, I don’t know what you would call that, it’s not a sphere, it’s not a cylinder and it’s not a cube. But it’s a playful little form that I discovered going around with three-dimensional paper models.”

Peterman says that his passion for art began with music and high school band.

“I went to (college) probably thinking I’d be a musician because I was a high school band geek and I’ve always been musically inclined but I didn’t think I was a really talented musician so I thought… I just had always been an artist in a sense that I drew from an early age and teachers would always recognize that but I just didn’t think that there was anything special about it. But when I got to college, I took a class and quickly discovered that I really liked this. So I just took off and focused on art and got a BFA in art and I went to graduate school and started a track in grad school teaching, basically teaching as a grad assistant. A few years out of grad school I just talked for about seven years until I got this job at VSU.”

The exhibition will be open until September 13th. 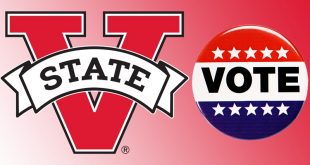