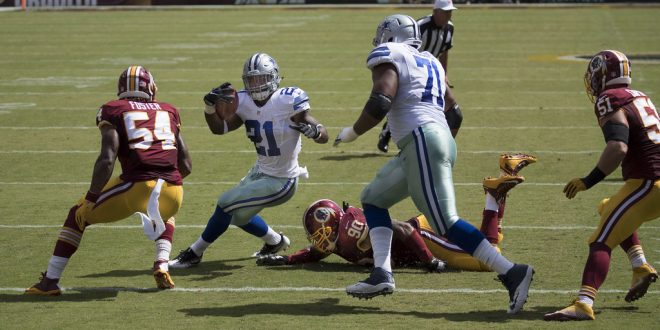 Cowboys running back Ezekiel Elliott (21) runs through open hole against the Washington Redskins on September 18, 2018.

Ezekiel Elliott gets his wish from the Dallas Cowboys.

The Dallas Cowboys star running back signed a six-year, $90 million contract extension with $50 million guaranteed and $16.35 million on a signing bonus, making him the highest paid running back in NFL history.

He also reset the market for the position, eclipsing Los Angeles Rams’ star Todd Gurley at $57.5 million, $45 million guaranteed and an average annual salary of $14.375 million.

Most running backs that play or have played in the NFL don’t get the big payday they’re after because their career spans are relatively short.

Elliott reportedly told the Dallas Cowboys organization he was not going to play a single snap this season unless they were going to pay the money that he rightfully deserved. At the time of his holdout, Elliot was still under his rookie-deal.

Cowboys Owner Jerry Jones gave in to the noise, giving Elliot the extension. There is a growing belief that the Cowboys are on the cusp of a championship-run whether it be this season or the next.

Whenever it is, Jones and the rest of the Cowboys front office understands they cannot win without Elliot. The team will go as far as he takes them, which is probably Miami (where the Super Bowl will be held this year) if you ask him.

Ezekiel Elliott has led the NFL in rushing yards twice since he was drafted in 2016.

Last season, Elliott would have another remarkable season for the Cowboys, leading the NFL in rushing at 1,434 yards.

Elliot is just 24 years old, which is pretty young in running back years. He is currently in the prime of his professional playing career with a lot of mileage to put on his tires.

As he gets closer to 30 years of age, his value will decrease and he will no longer be seen as one of the top-3 runners in the sports. While the iron was hot and his services are at its peak for the Cowboys, Elliot struck.

Jones continues to live in the Cowboys ‘90s run, where they captured three titles in 1993, 1994, and 1996. In those years, Jones had Emmitt Smith, the longtime Cowboys running back and NFL all-time leading rusher.

Long before Jones was even the owner, the Cowboys had Tony Dorsett in the backfield with Tom Landry at the helm. Dallas won Super Bowl 12 behind Dorsett

Dorsett was the framework for what a Cowboys’ running back was about. Records were set, Elliot and Smith broke later down the line.

Point is, Jones needs Elliot more than he wants to admit. History can tell him that.

Previous People Poll: What Advice Would You Give Incoming Freshmen?
Next Blazers, Goff start season 1-0 with victory at Albany State