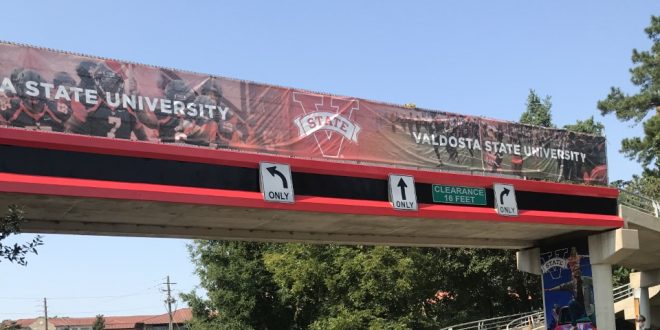 The newly decorated bridge sit on Baytree Road next to Pine Hall and in front of the Student Union entrance.

Is VSU branding project for spirit or recruitment?

School spirit is a lot of things. It’s showing up to football games in all your red and black gear. It’s
promoting any VSU events. It’s even wearing a VSU t-shirt to class. But is it putting up VSU logos in
different places around the school?

“Environmental branding” is anything on the physical campus to help brand the campus and spread its
image. For example, the newly designed pedestrian bridge which sports massive murals of all-too-happy
students.

Keith Warburg, executive director in the Communications and Marketing Department, was one of the directors on this project, and said that increasing environmental branding is important because it connects the community to the school.

“We want to reinforce a strong sense of place so that when they (students and visitors) come to campus there is pride and recognition in the school, the colors, the message and what we stand for,” he said. “The more that we brand our campus with physical spaces, the more recognizable it becomes to people who are walking by or visiting town or driving by the campus.”

The Environmental Branding project is a partnership between Student Affairs and Student Success that started in the spring semester. Warburg said that Whitfield Signs of Statesboro, Georgia, designed, printed and installed the vinyl graphics that they received from VSU creative services.

“The first phase was to pressure wash the overpass to create a clean surface for the vinyl to adhere to,”
he said. “From there, the vendor (Whitfield Signs of Statesboro, GA) printed the materials and installed
them over the course of three days this summer,” he said.

Warburg said that the project is not completely aimed at recruiting and increasing enrollment but
mainly aimed at increasing pride for the students, faculty and staff.

“The more we can increase the pride and sense of place and the school spirit the greater the attachment
to the campus we can build for the students and the employees who are already here as well as those
wanting to visit,” he said. “The idea is to just make the pride of the campus a little bit stronger for the
new school year and so that hopefully the students will retain and progress and stay around until
graduation.”

Christine James, professor in philosophy and religious studies, said that she hopes that the bridge and
other new designs will get the message out that VSU is an institution that cares for their students and is
interested in what the students want to do.

“I think it was especially good that they put it there before the new students came in for the fall
semester because it sort of welcomes the new students and lets them know that VSU is here and active
and that there’s lots of different things to do,” she said.

James said that she isn’t sure if recruitment was the main thing that influenced the bridge to be
redesigned, but she thinks it will help with recruitment.

“How much tuition money VSU gets depends on how many students were here about 2 years ago and so
when it comes to things like new advertising and new recruitment material, part of that goes into the
idea of recruiting new students so that in the future we’ll be able to be funded well.”

Warburg said the pictures that were selected by VSU Creative Services showcases VSU’s diverse student
body and the many things that occur on campus.

“The final product reflects the prestige of our championship athletic programs, arts outreach, and
hands-on experiences in and out of the classroom,” Warburg said. “Our goal is to replace the photos
periodically as they age. We plan to use each replacement opportunity to reflect other areas of campus
over time.”

Shardajia Mccloub, freshman early childhood education major, said that as an incoming freshman,
seeing the pictures on the bridge makes her feel at home here at VSU.

“I think the decorations on the bridge are cool,” she said. “It highlights a lot of things that are going on
on campus as well as gives the bridge a nice look. This seems like it’s a college town. Everywhere you
look there’s Valdosta State something so I think it’s really cool how anybody passing by can just look at
the bridge and be like oh there’s basketball or band or football.”

Gabral Mata-Ruiz, sophomore criminal justice major, said that the bridge instills a little more pride
throughout the community, but thinks that the Environmental Branding project could have been done
later if there were more important projects to be done.

“I feel like if there is a higher priority for other things then it should be put on the back burner,” he said.
“It shouldn’t be the top priority to make the school look beautiful.”

Warburg said that the project isn’t finished just yet. The next steps are to add more art work and
touching up the VSU logos that lead up to the school.

“We’re also going to be updating the light pole banners around campus that you see that have the
universities name and logo on there, we’re going to put up some new artwork and some new
messaging,” He said. “We’re also going to be spreading those around to the outside edges of campus. So
where they currently aren’t on, things like the roads and the side streets, we’ll have them there on the
edge of campus so that as people are driving by they’ll recognize where they are.”

Previous Pop Addict: Nicki Minaj, It Chapter Two, Ariana Grande
Next People Poll: What are your thoughts about parking at VSU?