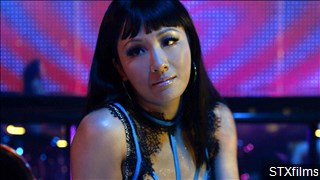 On Sept. 13, the highly anticipated movie Hustlers was released in theatres.

Directed by Lorene Scafaria, who also directed movies such as “The Meddler” and “Seeking a Friend for the End of the World”, “Hustlers” featured a star-studded cast, with Jennifer Lopez, Constance Wu, Keke Palmer, Lili Reinhart, Julia Stiles, Cardi B, Lizzo, and more. Usher even makes a surprise appearance!

Based on a true story, the movie follows a young single mother named Dorothy, played by Constance Wu. She is being interviewed by a journalist named Elizabeth (Julia Stiles) as she recounts her tales as an exotic dancer under the guidance of veteran stripper and her former friend Ramona (Jennifer Lopez).

Dorothy, also known as Destiny, turns to stripping so that she can support her grandmother. After seeing a popular performance from Ramona, she decides to meet her. The two become friends, and Ramona decides to guide Dorothy through the world of hustling. After an economic crisis occurs, the ladies, along with a few other friends, decide to drug and rob rich men as a means to become wealthy.

After a while, their schemes start going downhill, and the women end up being arrested for their crimes. This would ultimately tarnish Dorothy and Ramona’s relationship, which leads to the interview mentioned earlier.

I loved the concept and plot of the movie. The movie perfectly manages to keep you laughing while also telling an interesting and motivating story about family and sisterhood.

The casting and acting in this movie were incredible! All the women in the movie did an astonishing job of bringing the story of strippers-turned-hustlers onto the big screen.

I would even say that there were even some Oscar-worthy performances, specifically for the performances of Constance Wu and Jennifer Lopez (Shocking, I know!). The chemistry between these two women was extremely powerful, and they made sure you knew that their sisterhood was real.

The soundtrack of the movie pulled from a variety of genres, including R&B, dance, and indie music and featured legendary artists such as Britney Spears, Lorde and Janet Jackson. The music fit the tone, mood and settings of the film very well.

The movie also has some very quote-worthy dialogue! My absolute favorite quote from the movie has to be “This city, this whole country, is a strip club. You’ve got people tossing the money, and people doing the dance.”

I recommend watching this movie. If you have a taste for comedy-drama films that don’t hold back and push as many boundaries as possible, this is the movie for you!

Overall, I feel like the movie lived up to the hype it was receiving since its trailer release. It served us non-cheesy comedy, compelling drama, looks to die for, and performances to remember. I would give this movie 8.5 out of 10!

2019-09-25
Malia Thomas
Share
Previous People Poll: What’s your favorite Starbucks drink?
Next Unbelievable. The only way to describe this series.