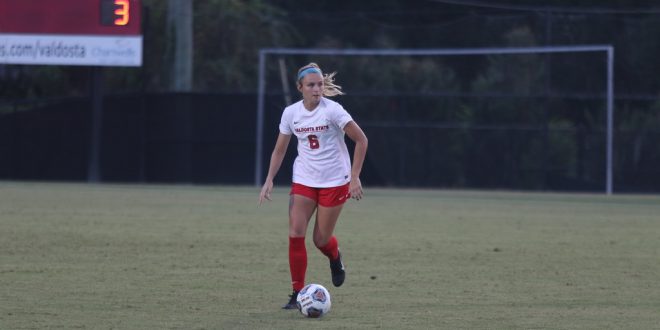 Hall (6) has played in 33 games with 26 starts during her athletic career at VSU.

Sports are sometimes taken too far.

It’s true, they bring together a school, a community and pride to a university. The stress can get to players, having them lose their love for the sport.

For VSU soccer junior Lexie Hall, the joy of the game has never been loss, even with the increased accolades and attention on her game.

The star center back is returning in new role for the Blazers soccer team, as a leader of the team and focal point in the middle of the defense. Hall was the only player to make an all-conference team last season, as she earned first team honors in the Gulf South Conference.

“I was shocked to be named to the team honestly,” said Hall. “I just try to go out their and have fun and play hard, and hopefully we win the game as well.”

Hall started playing the game at 12 years-old, she had a background playing gymnastics and cheerleading before, then took up soccer to play with some of her friends.

While that is considered old to get into soccer, she had a real talent in the game, and signed on for the Jacksonville Armada club team, where she was noticed by VSU.

“My parents really saw that I could play and wanted me to stick with the sport, and I liked getting to play with all of my friends and staying active. That’s the mindset I bring here as well.”

Indeed, the Blazers training room was light-hearted but focused, as the team believes they have the most talented squad the Blazers have ever had. Last season they made the GSC tournament, but lost to West Alabama in the first round.

The Blazers have started this 3-3 in a difficult start of the season, plagued by weather cancellations and injuries that have thrown the team’s fitness off to begin the year.

One trend is noticeable in this start: defense wins games for the Blazers. In their three wins, they’ve had three clean sheets, something head coach Stephen Andrew attributes to Hall’s leadership.

“She’s really taken on a vocal role on the team this season,” said coach Andrew. “We’ve given her a lot to deal with this season, and she’s been great at handling it and been a great player on the team.”

Hall has been working to add more and more to her game each and every year, and coach Andrew said they had been working on her passing and distribution from the defense.

The center back is an important role for a team’s defense. There are a lot of roles a center back plays, including the vocal leader to keep the defense in line, defending balls through the air, marking opposing teams strikers and being the last line of defense for a team.

Separating the good from the great center back is the ability to distribute the ball effectively, finding open teammates to start possession spells for the team. Hall has been impressive so far this season, and she already has one assist to start the season.

“Obviously she’s a tremendous athlete, and built the base of a great defender for us, but being able to distribute from the back and find teammates instead of just clearing the ball back down field is incredibly important in keeping the ball.

She’s becoming more and more confident in her ability and it shows on the field.”

Hall continues to grow and improve her game with dreams of becoming an all-American and conference championship.

It’ll be a tough road ahead for the Blazers, as the GSC has a number of competitive teams, including West Florida, who finished 20-1 last season and are ranked no. 13 again this season.

Coach Andrew does see a lot of potential in this group, however.

“It’s a great group with a lot of talent. There’s no easy game in this conference, but if we play together, stay fit and work hard we can make the conference tournament again and even the final four. We take a lot of pride in our clean sheets in have to do that all season.”

For Lexie Hall, she sees and enjoys the journey every step of the way.

“It’s a great group of girls who are just a lot of fun to play with,” said Hall. “We can do a lot of great things and hopefully we’ll get that conference ring this season.”

Previous Vape: Flavor of danger?
Next Check out the Ashley Street Station this weekend.