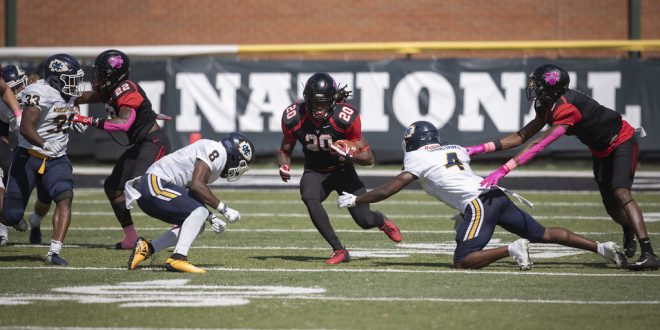 Jamar Thompkins (20) burst through open hole versus the Mississippi Choctaws on Oct. 5 at Bazemore-Hyder Stadium.

VSU Blazers running back Jamar Thompkins does not breathe.

It’s like he laces up the cleats, throws on all the padding and lines up in the backfield week in and week out. The Blazers needed all 149 rushing yards from Thompkins, as he shouldered the team to a 42-17 victory over the Mississippi College Choctaws on Oct. 5 at Bazemore-Hyder Stadium.

The Blazers improved to 5-0 on the season, continuing to shatter the school-record winning streak to 20 games with the win.

“This team likes playing the game,” Head Coach Gary Goff said. “I think they have done a really good job going into week six. These guys want to come into practice everyday and have fun playing the game. We just want to be 1-0 every week.”

The passion showed faster than the crowd could blink.

On just the second play from scrimmage, Thompkins cut through the open hole within the offensive line and ignited the crowd for a 54-yard touchdown, giving the Blazers the opening lead.

After closing out the Choctaws on the ensuing drive, the Blazers got creative. Blazers quarterback Rogan Wells snapped the ball and used a reverse pass to toss a 50-yard missile to sophomore fullback Kyler Crosby for a 14-0 lead, still in the first.

The Blazers defense was wearing down towards the end of the first quarter as the Choctaws triple-option offense produced 11 plays, ending in a one-yard run from Choctaws quarterback Detric Hawthorn.

Blazers defensive back Cory Roberts was livid after receiving a pass interference call on the Choctaws first scoring drive, his first of two in the game.

“It was what it was,” Roberts said, shrugging off the calls. “I can’t really call or say how I felt in the moment, but the referees are here to call a fair game and they did that. I’ve just got to continue to grow and get better as a player. Just play the next play.”

In the second and third quarters, both teams were relatively equal in point production as Thompkins scored on a three-yard run and the Choctaws notched a field goal in the second quarter.

Hawthorn scored on a nine-play drive with a one-yard run in the third quarter. With 47 seconds left in the third, Blazers wide receiver Brian Saunds goes on a post route as Wells connects for a nine-yard score.

Nobody was within a mile of Saunds.

In the fourth quarter, Blazers wide receiver junior Lio’undre Gallimore got some relief as he scored his first touchdown of the day on a fade in the back of the endzone.

Gallimore could not buy a reception in the first half as he was double-teamed and, sometimes, triple-teamed by the Choctaws defense.

“It’s not fun,” Gallimore said on not getting the ball early. “I am going to start by saying it is not fun. It is a team game, I know. Coming off of last year, I expected a lot of [double teams] this year. As long as we win, I don’t have to catch a single ball. It’s a team thing. As long as they are focused on me, we must be doing something right.”

Gallimore amassed 10 yards on two receptions in the matchup.

Thompkins, on the other hand, put the icing on a beautiful cake late in the game. With three minutes remaining in regulation, Thompkins burst through for a 68-yard run, his longest of the day.

He was tackled at the one-yard line by Choctaws defensive back Justin Jackson. Thompkins regretted looking back as the endzone awaited him with just a few more steps.

“I glanced out of the side of my eye because I had seen [Jackson],” Thompkins said. “I was like ‘Should I dive, or should I just do something to get in the endzone?’ Unfortunately, he got me at the one-yard line. It didn’t work.”

Thompkins scored on the next play to seal the deal for the Blazers.

It was “sticking to the plan” which got the Blazers a win against a very complex team such as the Choctaws.

“You’ve just got to play assignment football,” Goff said. “You have no idea of the gimmick plays and trick plays, you can sit there dream them all up. Let’s not just chase ghost. If we just play assignment which is ‘I’ve got my man or I’ve got my run fit.’ Just take care of our your responsibility on the field and we will be fine.”

Photos: Over 2,700 students move on campus for fall semester

After former dean Keith Walters was arrested for the involvement of a child sex sting ...