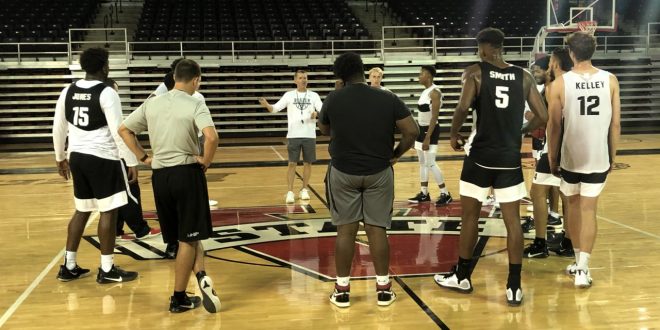 The Blazers started practice Oct. 15. The team returns three seniors and adds a variety of transfers and freshman.

The Blazers basketball team began the start to the upcoming season with their first official practice in the VSU Complex on Tuesday evening.

Head Coach Mike Helfer enters his 17th season at the helm and will continue to operate under the run-and-gun system that has made the Blazers feared in the Gulf South Conference.

But there’s one caveat.

There are new faces to integrate into the system.

“We are going to have to find out what our identity offensively is going to be,” Helfer said. “We are still going to play my style and my system, but I think coaching is a challenge every year.”

Helfer mentioned that the challenge primarily comes from shifting the system in such a manner that it fits perfectly, based on the personnel. The Blazers return four players from the previous year, adding nine more in transfers and freshman.

Senior forward Clay Guillozet, Preseason All-GSC First Team selection, is entering the year as one of the undisputed leaders on the new-look squad.

Guillozet said that he plans to lead by example this season.

“There’s only so much you can say, the rest of it you just have to show through your own work ethic,” Guillozet said.

“So, I just have to go as hard as I can in every drill, showing some of these young guys that it doesn’t matter what you do, just go out there and compete no matter if you’re a veteran or new guy. Give everything you’ve got and it’s going to work out for us.”

However, being the leader of the team comes with new responsibilities. Guillozet has found that he must study his teammates to understand their tendencies.

“Everybody has their own little style of game,” Guillozet said. “We have a lot of talent. Its just a matter of everybody playing together and learning each other’s game and finding each other’s niches that we can run with.”

The two backcourt spots are up for grabs.

Helfer offered his thoughts on the team thus far.

“I think we are a little bit bigger and more athletic this year,” he said.

The Blazers will be able to test both as they travel to Athens, Georgia to face the University of Georgia Bulldogs in an exhibition matchup on Oct. 18.

Helfer said the matchup is for the institution, not necessarily the student-athletes.

“When you play a game like that it’s for the institution as much as it is for us,” Helfer said. “Because you see Valdosta State everywhere. It’s going to be in the news media about playing an [South Eastern Conference] team like Georgia, especially in our state.”