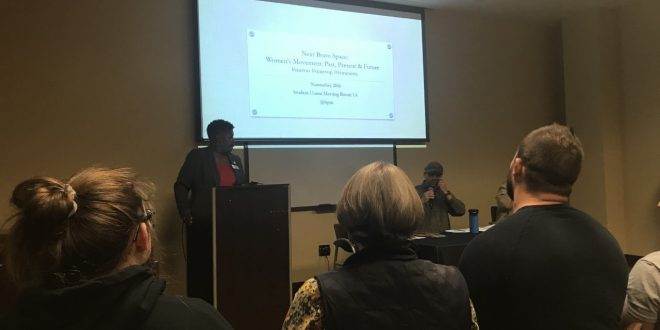 Some topics are difficult to discuss and talk about among your peers. Student Diversity and Inclusion has found a way to bridge this gap by opening a space for students to comfortably speak about difficult topics.

On Oct. 23, Student Diversity and Inclusion hosted a Brave Space Dialogue on the topic of toxic masculinity.

Sandra Y.G. Jones, Director of The Department of Student Diversity and Inclusion, started this event so that students can express their opinions and concerns in a safe, judgment free environment.

“This generation doesn’t really talk much. To sit down across from someone that’s different about a real difficult conversation, we don’t do,” Jones said. “So, I think that if we give people the opportunity in a facilitated guided conversation, there’s a bunch of opinions.”

Many of the men that attended the event expressed that there are certain expectations that are put on them and these expectations causes toxic masculinity.

Many times, men are told to be strong and toughen up, which prevents them from showing emotions and tapping into their feelings. Also, the expectations that are put on men causes them to limit women to a certain role which can then become toxic to women as well.

Since society expects men to be the leader, women feel inferior and required to submit to men; when they don’t submit, the man’s ego is then challenged causing them to act in an aggressively dominant way.

There are different types of toxic masculinity that often gets overlooked, for example rape culture.

Sophomore Amanda Pennington said that she grew up with a lot of male friends and they often used her as someone to let emotions out on because she wasn’t a “bro”.

“It was kind of weird to see them change up personalities; they’ll get more masculine around all of our guy friends, but kind of soften up and show a more feminine side around me,” Pennington said.

Pennington also said that she only recalls her father crying twice and that her father was very structured and had the mindset of “I’m a guy, I’m not going to cry”, and for her to see him have that genuine moment was powerful.

Lindsey Surprenant, junior, said her experience with toxic masculinity has been negative so far.

“Toxic masculinity definitely makes me not want to be around guys because if I’m going to get yelled at for anything that I say, I’m not going to be around you,” she said.

Brave Space Dialogues are usually hosted once a semester in the Student Union and they cover a variety of interesting topics.

Written and photographed by Breannia Stillwell.