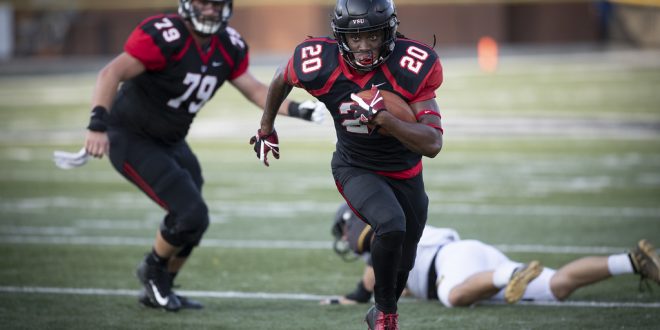 Jamar Thompkins (30) has a 678 rushing yards throughout this season while Seth McGill has 524.

Blazers sophomore running backs Jamar Thompkins Seth McGill, seem to be running up the charts with their season rushing yards.

Jamar has a solid 678 rushing yards throughout this season while Seth McGill has 524.

Both players have a real shot at getting close to 1,000 rushing yards each before the end of the season and Head Coach Gary Goff thinks so too.

“The offensive line, running backs, and quarterbacks are doing a great job,” he said. “It’s very encouraging. I think we have three of the top rushers in the conference right now when you throw Rogan into that mix.”

No one expects Wells to surpass the 1,000 rushing yards’ mark, but to have both running backs accomplish the feat would be special.

It could really be a groundbreaking season if all three players were able to get a thousand yards.

“It’s not a goal of ours but we’re kind of taking what our opponents give us,” Goff said.

When looking at rushing yards, the offensive line is a key aspect in the rushing game. The Blazers have a phenomenal front-five which gives Thompkins, McGill and Wells space to make plays.

With a stout offensive line, things can happen.

The offensive line gets overshadowed by key players but mainly they’re the ones who help plays work sufficiently. As long as there are healthy, the Blazers could continue shattering records.

“Just that continuity up there on the front means a lot for our success in the running game,” Goff said.