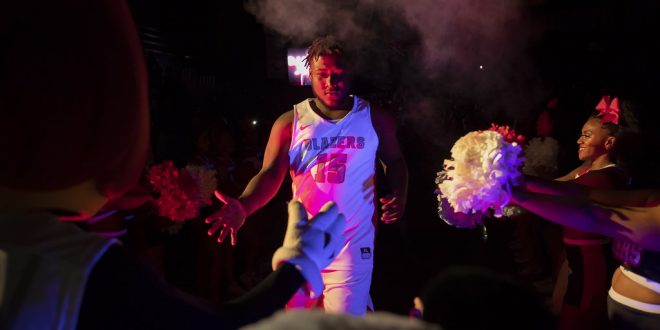 Darrell Jones (15) is one of four seniors on the Blazers squad, with Clay Guillozet, Bryce Smith and Tyler Edwards.

The Blazers (3-0) remain undefeated, as they dominated against Brewton Parker 100-68 at the VSU Complex on Nov. 12.

Darrell Jones notched his first triple-double of the season with 11 points and career-highs with 16 rebounds and 10 assists. Going into the second half, he already had five points, five rebounds, and nine assists. Eleven of those rebounds came out the second half alone.

Jones knew long before the game was over that securing a triple-double was within reach.

“At halftime, when I knew how many assists I had, I knew that it was a possibility and something I really could do,” Jones said. “That’s really the hardest thing, the assists, but everything else comes naturally.”

Head Coach Mike Helfer was even surprised a little when finding out that Jones was close to the illustrious statistic.

“I actually didn’t even know until late in the game,” Helfer said. “It doesn’t surprise me because Darrell’s game is very versatile. I know he’s a big guy, but he can dribble, he can pass it, he can shoot it. He does everything well.”

Jones wasn’t the only star of the night.

Senior forward Clay Guillozet earned himself a double-double with 26 points and 14 rebounds.  He was able to produce four steals with his stingy defense and went 11-20 from the field.

While most players rarely take 20 shots, Guillozet had a magic touch where everything was working for him.

Guillozet was on the other end on much of those assists by Jones.

“My teammates help me out so much because they can shoot it and score.” Jones said.” It’s not a weakness in our offense so once they try and stop one person, we have four other people that can really produce at any time.”

Helfer was pleased by his senior forward.

“He’s a unique individual and basketball player because he finds the ball in the most amazing times,” Helfer said. “He just has a great feel for the game and knows how to play.”

Bryce Smith was also had quite the night. He was shooting 3-7 from behind the arc and finished the game with 20 points. It seemed like everything he put up was falling in the first half. He also racked up a steal, a block and three assists.

When looking at the veterans on the team, Coach Helfer is proud of how their shaping themselves to better the team as a whole and for the new players.

In the first half, VSU shot 50 percent from the field with eight shots from beyond the arc and 10-of-15 from the line. Smith had 18 points in the first half. Guillozet had ten.

Brewton-Parker kept the deficit between 18-23 for the first ten minutes of the second half, but a 16-3 run by the Blazers made the score 96-62 with 4:30 left on a layup from Guillozet.

Putnam later hit a triple 100 points on the board, as the Blazers surpassed the 100-point mark for the second time this season.

VSU goes on the road for the first time this season Thursday at 7:30 p.m. at Albany State.