Home / Campus Life / National Council of Negro Women hosts ‘Can you see yourself with a suh?’ 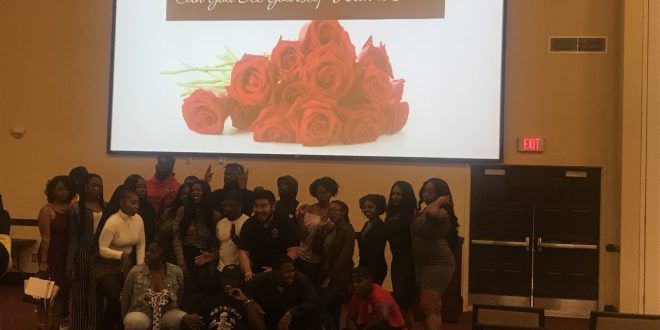 National Council of Negro Women hosts ‘Can you see yourself with a suh?’

Even though Valentine’s day is three months away, a lot of dating events have occurred throughout the semester.

One being a speed dating event hosted by The National Council of Negro Women inc. on Nov. 7 titled speed dating “Can you see yourself with a suh?”

Taahira Samuels, senior business management major and human resources minor said that her organization decided to host this event because they thought not a lot of organizations have put on something like this.

“I thought it was going to be a cute event, you always see auctions. Our theme for the week was NCNW travel through time. So this event was like a future theme. Like can you see yourself with a suh?”

The event began with an ice breaker. The girls had to put their shoes in a basket while the guys had to choose one shoe from the basket and match it to the girl it belonged to.

The next portion of the event was called, Bumble for the Boys.  Like the dating app, this game consisted of facts or traits of a girl that was shown on a presentation. Then the person would have 24 seconds to raise their hand and confirm that they were interested in that specific person. Whoever raised their hand first, got to match with that person. The game itself  was completely different from the app because the males got to make contact with the females first.

After everyone was matched with a person, the classic speed dating rounds began. The couples that were matched together derived from the Bumble for the boys game. There were suggested questions provided on the table for each individual. These were to help guide a conversation if needed. The couples had two minutes to chat and get to know one another before their time was up.

The event ended with a challenge round. Like the icebreaker, the females had to scatter across the room and hide. The males got in a line and counted to 35 before going to look for the female’s other matching shoe. The first guy to find their girl with the matching shoes wins.

Sydney Christian, senior, psychology major and president of National Council of Negro Women member hopes that the event has a positive impact on everyone that participated.

“I hope they had a good time and fun. It was definitely one of those fun events, where you’re not supposed to think about it too much,” she said. ” she said. “It was really fun and I’m really glad that people came out.”

Although, interracial relationships weren’t heavily discussed during this event, Samuels said that it’s still an important topic that people should be aware of.