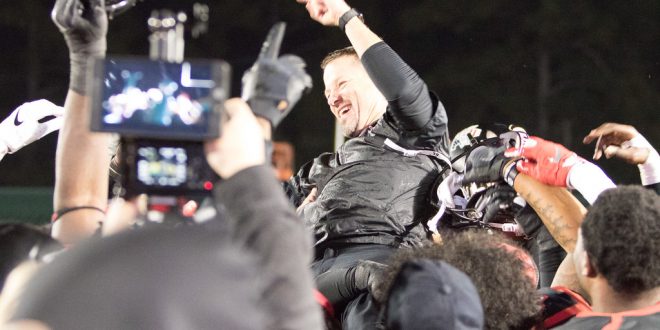 VSU Blazers head coach Gary Goff is lifted up by the team, as the Blazers defeated West Florida Nov. 9, 26-21.

The Blazers have nine student-athletes named to the first team for the most in the league, while West Florida had six first team selections.  Delta State, with nine total selections, had the most named to the second team with five.

The Blazers have won 25-consecutive games for a GSC record dating back to the 2017 season as it is tied for No. 11 in longest winning streaks in the history of NCAA Division II.

VSU will face the winner of No. 4-seed Wingate vs. West Florida game in the second round of the 2019 NCAA Football Playoff, set for Nov. 30 at 1 p.m., at Bazemore-Hyder Stadium.

The countdown has begun until winter break is here and then New Years is just ...