Home / Campus Life / The VSU Panda in his prime 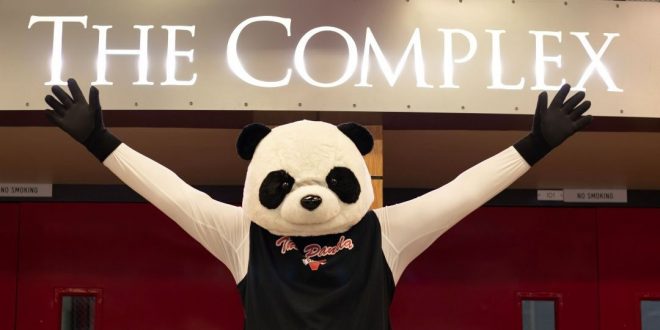 Have you ever heard of the VSU Panda? Well, now you have.

The VSU Panda in his prime

Everyone knows Blaze, the official Valdosta State University mascot, but do you know the Panda?

Kyle Duke, a student at Valdosta State University, is a 21-year-old senior criminal justice major. He is also the creator of the Panda. He began the journey with the Panda in 2018 and has been going strong and increasing school spirit ever since then.

“You have the complex crazies, which is more so the firepit now. I went to my first basketball game when I was a freshman. They were out there in neon and doing weird stuff. They saw me and they wanted me to stand over there with them. I had the option of a banana suit or a gorilla. I should have gone with the banana suit, but I went with the gorilla. So, that started it and I started going to a lot of games and I was also playing football then, so I had to kind of gauge my time.”

Duke said that the VSU Panda was not created with the intention of being what it is today.

“I don’t know, one day I just thought, I can’t remember what the theme was, I don’t know if it was something to do with animals or what and I thought well let me go buy a cheap panda head and throw together a whole outfit just for like a one time thing. It wasn’t meant to be what it is now,” said Duke.

Duke’s initial intent as the creator of the Panda was to create team and school pride as well as going out and interacting with the other teams. He never started with the hope of becoming popular and he doesn’t do it today to be popular. Duke did not have a complete answer as to why he picked a panda.

“I just thought of something simple and cuddly, and something fun that everyone likes,” said Duke. “I mean I guess I could

have went with just like a regular bear, or something, but I don’t know, anything was better than getting one of those horse heads.”

Although the VSU Panda is not an official school mascot, being a current VSU student, he is still associated with the school.

Duke had the idea of the Panda and created it almost overnight.

“Actually, I was working at Smok’n Pig, I used to work in the kitchen. It was kind of a slow night and I was thinking about stuff and I think we had a game coming up. So, the idea of a Panda came into my head and I remembered seeing one in Hot Topic, we have one at the mall, so I went online, and I ordered that head.”

He ended up with this as his first outfit by using the custom ink website to create the shirt. On the back of the shirt, it had a big red 1 with “The Panda” down the one.

“It looked like one of the shirts that you could get from the bookstore because it was black with a big Valdosta State logo,” he said.

He finished the outfit by wearing black pants and black tennis shoes.

When Duke first started wearing the Panda costume, he was worried about how people would view the Panda.

“I was afraid that when I first started, people would think that I’m trying to compete with Blaze or take his spot,” he said.

It started out as good old-fashioned college fun and turned into something much bigger than anticipated.

Duke thought that dressing up as a Panda would be fun but wasn’t expecting it to blow up.

Keeping up the social media and creating the Panda’s image was difficult for Duke. He got a lot of his inspiration from other mascots, like the Chicago Bulls mascot and DJ Marshmello.

“Everyone just loved it, and it became a big thing; I created an Instagram and that blew up,” said Duke. 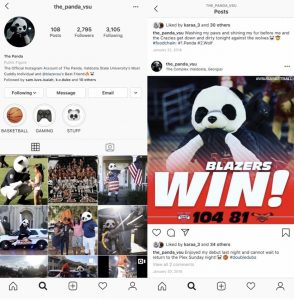 Eric Mortimer, the yell leader for Valdosta State Firepit said, “It seems like Blaze is the school’s mascot and The Panda is the Firepit’s mascot.”

In fact, as Mortimer said, the Panda does not come to the football games; he is strictly a complex crazy. As a complex crazy, the Panda attends Volleyball and Basketball events and games in the Complex to cheer on the teams.

Even though Panda is not paid or officially supported by the school, some people think that he could possibly have the chance to be made official.

Transfer junior, Leslie Walden said, “He’s there [at the Volleyball and Basketball games] supporting the people that do not get supported usually. I respect what he does, because those sports don’t usually get a lot of recognition.”

“The Panda, has always been a really great supporter and one of my favorite memories was there was a game that he couldn’t be at last year and he gave us a stuffed panda that was wearing a volleyball shirt and kind of went out of his way to let our volleyball players know that they were being supported,” she said. “But we love having him and we love any amount of support from students and I think he does a great job of generating some excitement.”

Aside from cheering on the sports teams at the Complex, the Panda attends other school events to show his support to the community.

“I always make sure I do National Night Out because my parents are former law enforcement. My dad is a retired Georgia State trooper and my mom used to be a deputy,” said Duke.

While this event is special to him, the Panda doesn’t stop there. He has been known to attend other events like Relay for Life and other school wide activities out on the front lawn.

“The Panda is my personality without speaking.” he said.

Duke said that once he is gone, the Panda is gone too. In fact, he is considering asking Dr. Rodney Carr, the Vice President of Student Success, if he can walk across the graduation stage as the Panda.

The Panda is his VSU legacy and he will take that with him when he graduates.