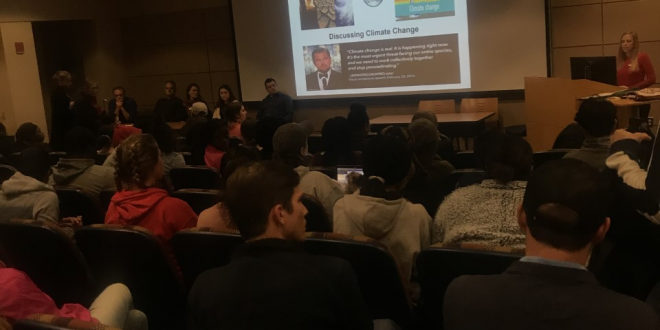 Students, faculty and staff gather in the Odum Auditorium to discuss climate change.

Planet earth is on fire, literally

Plastic shopping bags, plastic toothbrushes and the shirt you’re wearing right now—all things that we use in our everyday lives, but is it worth using those things if it means harming the Earth, where we spend our everyday lives?

Climate change has become even more of a hot topic ever since Greta Thunberg, a 16-year-old environmental activist, spoke up about the issue. VSU has also finally decided to speak up about the controversial topic by hosting a climate-change panel, sponsored by Students Against Violating the Environment(SAVE), The Philosophy and Religious Studies club and the Department of Physics, Astronomy, Geosciences and Engineering.

“Planet Earth is on fire. Literally it’s warming up every year,” Dr. Cristobal Serrean-Pagan, professor of philosophies and religious studies, said as he prepared himself to tackle the agonizing topic of climate change in front of a room full of students, faculty and staff. “The fact is, yes we human beings have the capacity to destroy ecosystems and life as we know it, and that’s why it’s so important to know the data, to know the facts, not just fake news.”

Issues with climate change became even more controversial in 2018, when  extreme weather like droughts, floods, wildfires and tropical cyclones multiplied.

Dr. Jason Allard, professor of geology and one of the panelists, said that high levels of greenhouse gases such as carbon dioxide and methane in the atmosphere have been caused by human activity and have sparked the rise of climate change.

“The fact that we are changing the concentration of greenhouse gases is quite obvious. We have for the past 2,000 years,” he said. “Probably about three million years ago is the last time we’ve had this high of carbon dioxide levels.”

With a high amount of carbon dioxide already in the atmosphere, the human race continues to  contribute to the increase of those levels, but Dr. Allard said that it’s not too late to change for the better.

“We are at a point that we have locked in a certain amount of climate change, it’s unavoidable. But how much is going to happen in the future we do have some control over if we take action, not just as individuals but as nations and the world,” he said.

Briauna Vick, vice president of SAVE, said  that making switches is the easiest thing to do to start helping decrease the high amount of carbon emissions in the atmosphere

Using sustainable clothing brands like REI, Patagonia and Reformation is also a good way to start taking action in the fight against climate change, but it’s not going to be easy to make these simple swaps.

Developing an environmental awareness and gaining respect for the planet Earth are just a few things that Dr. Ari Santas, professor of philosophy and another panelist, said is important when trying to take on the battle of changing the Earth.

“Once you understand that you start to realize you have a place in the world and you impact the world. And how you impact it has consequences. We’re not exempt from the laws of nature,” he said. “When you immerse yourself in something that you’ve come to understand and you see the connections, then you feel like ‘I’ve got to do something about this’.”

Taking responsibility will also make it easier to change for the planet. It’s easy to point the finger at someone else but instead we should be pointing the finger at ourselves. Change starts with you, and only then is when you can expect change from others.

“We have to rethink prudence. The environmental crisis is not about saving the planet. The planet is going to go on. It’s about saving ourselves,” Dr.Santas said.

Most students came out to the climate change panel to gain helpful extra credit points, but Amelia Cornwell, senior environmental geoscience and business management major, said that she has always been fascinated with the environment and believes a change needs to be done now rather than later.

“This is real and what we’re doing now is affecting, not us now but us later so we’re just now starting to deal with the things that have been going on for 20 years,” Cornwell said. “If we don’t make a difference, I mean it’s just going to keep getting worse and worse until we can’t do anything about it.”

Although it seems like it might be a while before there is a dramatic change in the current climate change, Dr. Santas is hopeful that by just informing people about the issue, there can be a quicker change.

“One reason I feel hopeful is because this is an issue that touches everyone, sooner or later and some of us are more insulated than others but that number of people who are insulated grows smaller every year,” he said. “I think part of the problem that we’re facing now is that we’re so insulated and we’re so isolated so plugged in mediated experiences.”

Plastic shopping bags. Plastic toothbrushes. The shirt you’re wearing right now. That will be what’s left on Earth if we don’t stand up and take action now, according to the panelists As Thurnburg, the young activist, said recently:

“We are going to change the fate of humanity, whether you like it or not.”