Home / Sports / Remembering Kobe: Everyone has a little bit of No. 24 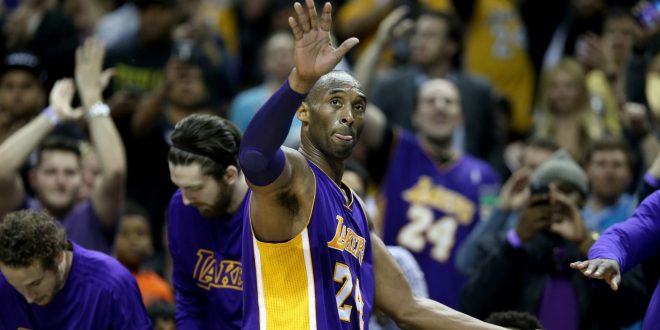 Kobe Bryant (24) was 41 years old and played 20 years for the Los Angeles Lakers. He won 5 championships.

Everyone has done it.

Wadded up a paper ball (possibly homework or something) and aimed at the nearest trashcan. We would get into our stance, feet aligned perfectly and let out a subtle leap into the air.

As the wad flew threw the air, we would extend our shooting arm, leaving the flick of the wrist. We all would yell the same thing: Kobe.

We lost him Jan 26. in a helicopter crash in Calabasas, California. Along with eight others, including his 13-year old daughter, Gianna. It was reported by various news outlets that the helicopter was headed to Gianna’s travel basketball practice.

TMZ first reported the news. I did not believe it, nor did I want to. It crushed me.

I never met Kobe Bryant. A LA Lakers great. Arguably the best Laker ever. He meant so much for the game of basketball, sports and culture. My generation could probably agree that he was the reason they picked up a basketball or even had a thought of playing sports.

I know he did for me.

See, in my middle school days, basketball was my sport of choice. I never played for the school, but my father signed me up for hoops at the local recreation center. A few of my close friends played alongside me.

My first coach at the time was a huge Phil Jackson fan, an ever-bigger Lakers fanatic. I will never forget the first day of practice in sixth grade. My dad dropped me off, along with the other parents doing the same. It was a two-hour practice on Tuesday nights.

From 8-10 p.m., we dedicated all we had to basketball. Coach taught us the triangle offense, a scheme used by Jackson in his Chicago Bulls and LA Lakers coaching days. The man won six with the Bulls and five with LA.

He coached the likes of Michael Jordan, Scottie Pippen, Shaquille O’Neal and Kobe, just to name a few. Jackson was well accomplished. So, you’re telling me that I can learn this offense that my favorite basketball players orchestrated that led to championships?

After the end of the practice, I was sold. We had received our jerseys and I was thrusted as No. 23. My best friend Jerkevion received No. 24. I offered 20 dollars to him if we could trade.

I backed off. But then, I had a thought. The world has never seen Kobe and Jordan on the same squad. Jordan was No. 23 much of his career and Kobe had No. 24. Jerkevion and I were nowhere close to the greatness of those phenomenal stars.

But we were kids. We idolize them.

We ended up winning the championship that season, playing a short 12-game schedule. There was one game where I attempted a fadeaway jumper in the post.

It clanked off the top of the backboard. Still, to this day, I do not understand how that happened. Physics probably couldn’t give me that answer.

I was just trying to be Kobe.

It feels so bad losing him. Not just the athlete, but the person. We have all seen the videos of Kobe yelling at his teammates or cursing on the court. We have heard the rumors of tension between him and Shaq. We even remember when Jeremy Lin waved him off in an isolation situation.

Kobe has done a lot and has been in the craziest of positions. But all in all, he thrived on the accountability of others. Ask any player who played with Kobe. I am almost certain they are stunned by the news, but even more thankful that he jumped down their throats in practice.

He demanded performance. But not just any performance. If you weren’t on his level (or better, which was rare), he would make it mandatory to get you there. You might’ve not liked it, but you had to respect it. I would’ve been skeptical playing with Kobe. Only because I know he would command so much from me and I would be the worst ball-player ever.

But I wouldn’t want to be on the other team, tasked to guard him in a game. Kobe, in my opinion, was the most unguardable player of my generation. He was so skilled offensively. He could shoot with either hand. He had trademark footwork. He was a three-level scorer.

There was no where on the floor where he wasn’t confident in putting the ball in the basket. I bet if you had dared Kobe to shoot from the parking lot, he probably could. This is the same guy that jumped over a moving car (maybe).

He was a different breed. This is what he called the “Mamba Mentality.”

When Kobe was in a zone, he would bite his jersey. He would grin liked a raged pitbull in a cage. When he posted up, you were on an island. You had to find a way out.

Kobe was on Jimmy Kimmel Live one day and I will probably never forget this. Kimmel asked Kobe about getting away with so many fouls in his career. The response was just as legendary as he was.

“I read [the referee’s handbook] to understand where they need to be in certain moments of time so if I need to get away with a foul…That ref back there…is not gonna see this little hold right here,” he said.

Nobody says that, but Kobe.

He was probably the most cliched athlete of all time. You know, the typically first one there, last to leave. He was up before most of us. He already had a full practice alone before the actual team was supposed to practice.

He was a step ahead. And we will miss that. The determination and will to be the best is what made him more famous than his athleticism warrants.

And his daughter was supposed to be next in line.

We will never know.

Previous Dear Kobe, A eulogy to the man I’ve never met, but who I’ve known my entire life
Next Bless that mess: Weird cleaning hacks that work