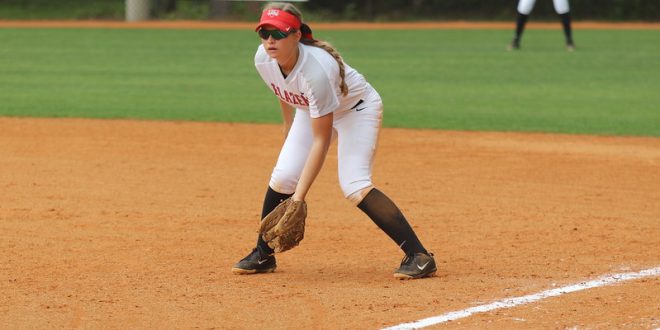 VSU’s defense and hitting will be relied upon after the Lady Blazers lost their top two pitchers.

The Valdosta State Women’s Softball team are gearing up for another swing at bringing a championship back to Titletown.

The Lady Blazers are looking forward for this upcoming season and they believe that this is their year to win.

The Blazers 14 straight appearances in the NCAA postseason marks the second-longest streak in the country behind UAH’s 17straight trips. In addition, the Blazers have consistently ranked among the top 25 teams in the National Fastpitch Coaches Association rankings and have made three NCAA Division 11 National Championship tournament appearances in the last years.

VSU came into the season with a preseason rank at no. 24, and the team was selected fifth in the 2020 Preseason Gulf South Conference Coaches Poll.

The Blazers garnered 107 points in the poll for the fifth position as voted on the by league’s head coaches.

“Our goal for our team to is win a National Championship untimely, and last year we felt short of that but this year I think we’re back stronger than ever” said Logan Hill, a senior utility player.

“We have experienced players we don’t have a young team, and we have majority of our starters returning this year.”.

The Lady Blazers are a very confident group and they are determined to accomplish something special this upcoming season.

Macera has a 643-186-2 record throughout his coaching career. He is the highest winning coach in program history.

“We’re trying to win a championship every year and that’s the only reason why we’re here” Macera said.

“We don’t spend all this time and work this hard and not have those expectations.”

Under Macera, the blazers have appeared in the NCAA South Regional Tournament times.

Macera also said that he is a coach that believes in having the same work ethic when it comes to the classroom as well.

The Lady Blazers want to continue the success that Macera has seen over the years, and hope to start that off with a victory on January 31 on opening night.

The Blazers will open on the road, as they start this week at the Gulf Shores Invitational in Gulf Shores, Alabama. Their opening game is on January 31. They will play five games from then until Feb. 2, and finish up the road trip playing at the Flagler Invitational Febuaray 7-9.