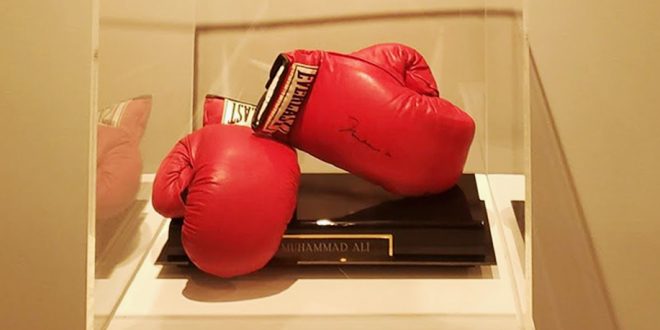 Signed boxing gloves from Muhammad Ali are just one of the many artifacts at the Copeland African American museum.

According to the VSU’s 2019 fall enrollment update from the Office of Institutional Research, The African American makeup of VSU’s campus is 35.6 percent. African American students are now able to see the great success that those before them have accomplished at the new Copeland African American Museum that opened on Jan. 28.

The museum is named after Valdosta’s local lawyers, Roy Copeland and wife Cheryl Copeland. The couple began collecting historical artifacts in 1988 when Mrs. Copeland got her husband a pair of signed Muhammed Ali gloves and it grew from there.

TaMara Tolbert, a graduate assistant for the Copeland museum, also said that the museum will have a positive impact on VSU.

“I think this means that we’re taking strive to enlighten and give insight on the things that have happened in the African American community and recognize that we have pretty influential people on this campus that are looking to advance the African American community’s history in Valdosta and those who may possibly be coming from neighboring cities and give us opportunities to have something that is unknown,” Tolbert said.

Ashley Braswell, director of development, said she is happy that Valdosta now has an exhibit that can be seen so that people, including those that may see otherwise, can see all of the accomplishments that African American people have done throughout history.

“I think that (The Copland Museum) gives a space to recognize the accomplishments that are not exactly out there and celebrated all the time,” she said. “It gives students a place to come and see the great people that came before them and to know that no matter what adversity they’re facing that they can do it with a little hard work and grit as did all the individuals here on the walls,” .

The museum has many artifacts from BB King’s signed steel guitar, letters from Martin Luther King and signatures from Alex Haley, author of Roots, just to name a few. The displays are set to change every three to six months so  best to see the current collection as soon as possible before they are gone.

Previous Opinion: College branding for customers, not students
Next VSU attempts to swipe away hunger