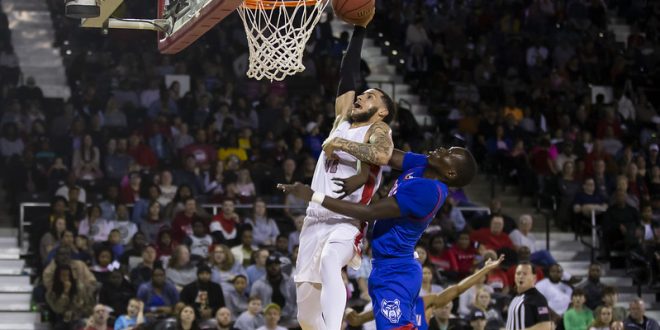 Head coach Mike Helfer doesn’t want to talk about the streak, but 14 in a row was never in doubt.

After a late first half run, no. 12 Valdosta State coasted to their 14th consecutive victory 105-74 over Montevallo. The win puts the Blazers four wins away from the longest winning streak in school history, which was 18 in 2018.

After a quick run, starting center Bryce Smith picked up his second foul early in the first half, with just over 10 minutes to go and the Blazers holding a 10 point lead.

Montevallo began to pound the post with Smith on the bench and the Falcons started to chip away at the lead. Smith struggled with foul trouble all game long as Montevallo looked to play inside.

“They got Bryce a couple, and I took him out early and the first half,” Helfer said. “I was cautious with him and didn’t get him back in the first half. They play out of the post a lot and sometimes foul trouble is just something that is a part of it.”

“We were aggressive to get to the line in this one. More importantly, we stepped up and made them. It got us going a bit. It’s always hard if you don’t make free throws and come away with empty possessions so that was good for us.”

That ability to get out in transition and make plays turned the tide for VSU. Junior Burke Putnam led the way in the first half, scoring eight points and four assists. His ability to find players in transition and get to the free throw line was what turned around the Blazers offense.

“The guys do a great job to get me involved in transition,” Putnam said. “They find me when I leak out after a missed shot and we just get out and make plays happen. We all do the same thing for each other and make the right play.”

Putnam was the aggressor all evening, finishing with 18 points and team-leading seven assists. Eight of his points came from free throws. He was one of five Blazers to score in double figures.

“I have a quicker first step than most guys, so I’m able to get by a lot of people. Then, when the bigs step up it’s all about using my body to draw contact or defend the ball and finish at the rim.”

The second half was much of the same, as VSU picked up right where they left off. Senior Darrell Jones was all over the place on both sides of the ball, and ignited the Blazers on defense with an early steal and transition basket. He finished the game with two steals and a block to go along with his 19 points and nine rebounds.

“Coach mentioned that I needed to step up and get our team going,” Jones said. “So that is what I tried to do on both sides of the ball tonight. Just look for opportunities to make plays for my team.”

The game ended with the starters on the bench, celebrating their teammates on the court with as much energy as they played with throughout the game. Junior DeMarcus Addie hit a step-back three that was the final dagger, putting the Blazers over the 100-point threshold.

VSU now holds a 21-3 record, and maintains their first place standing with a 15-2 record in the Gulf South Conference. Helfer praised the team’s ability to make adjustments, play together and take care of the ball to keep the team motivated. The Blazers finished with 20 assists to only eight turnovers in this win.

“Anytime you can get 20 assists speaks that just says a lot about the players,” Helfer said. “They want to buy into a team atmosphere and share the ball and pass to the next guy. Between that and the turnovers it was a solid game. (Turnovers) is going to be a critical stat at the end of the season, as taking care of the ball and not giving away possessions can be the difference in March.”

They’ll look ahead to senior night on Saturday where they’ll their four seniors for their last regular season home game at the P.E. Complex. They’ll take on West Alabama at 4 p.m.

“It’s been a great time here, and I don’t want it to come to an end,” Jones said. “So it’s all about coming out and playing hard to preserve home court advantage into the tournament so we can keep this streak going.”

Helfer stressed not getting complacent and not talking about the streak, but the players remain confident that the sky’s the limit for the Blazers, and they feel like this team is a special group as they inch closer to the tournament in March.

“I believe we can go all the way, honestly,” Putnam said. “That’s how we look at this team and that’s what we want to do. I think that’s what we’ll do.”