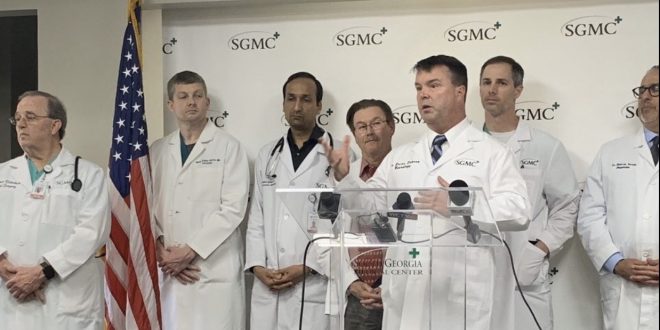 Dr. Brian Dawson, Chief Medical Officer of SGMC, confirmed that since the first case of COVID-19 was found at SGMC, five staff members are now considered “high risk” and are being closely monitored.

SGMC officials recommended that those individuals stay home for up to 14 days from when they were exposed to the patient diagnosed with COVID-19.

Dr. Dawson said that as of 1 p.m. on Thursday the patient that was being treated and evaluated at SGMC from March 5 to March 7 is still critically ill and is being treated at the southside hospital in Florida.

“While the patient was here in the hospital during those days, the patient was admitted and was undergoing evaluations to determine the ideology of this patient’s symptoms,” Dr. Dawson said. “During this evaluation, this patient began to destabilize and became unstable and required one of our physicians to step in to help secure her airway by intubating her, placing her on a ventilator and subsequently having to send her down to another hospital in Florida where they could provide the advanced services.”

Although the hospital conducted a test drill on Feb. 28 to make sure that SGMC staff could properly identify an individual at risk of COVID-19 and respond appropriately, the hospital never identified that the patient had COVID-19 while she was being treated at SGMC.

Instead SGMC officials were notified on Wednesday after the patient was already transferred to a Florida hospital.

The patient is believed to be a woman. Dr. Dawson said he was unaware if the patient had traveled overseas.

Since transferring the COVID-19 patient back to Florida, SGMC has implemented some changes to their visitation policy. Visitors under the age of 18 are not allowed visitation and only up to three visitors are allowed in a room at once.

As of right now Dr. Dawson said that there is no one confirmed to have COVID-19 on SGMC campus.