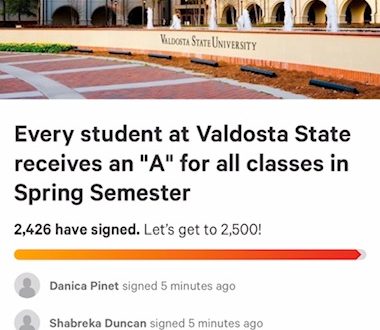 The petition currently has 3,000 plus e-signatures.

It’s no secret that all VSU classes have recently been converted to an online format due to the coronavirus pandemic. As a result, professors have had to tailor their syllabus to fit the online format so students can engage successfully in the classes as if they were still in face-to-face classes.

But some VSU students are not okay with the new online format. One in particular decided to take action and speak up about how she feels.

Markya Thomas, freshman nursing & interior design major started an online petition early Sunday afternoon that states that every student at VSU should receive an ‘A’ for all classes in the spring semester.

Thomas said the plan to start the petition came about when her and her five friends first found out that all classes were being conducted online. Thomas and her friends felt like they had to do something to help not only themselves but other students.

“We decided that we should create a petition to get signatures of students who believe that online classes are not fair,” she said. “Not necessarily speaking for ourselves, but there are many students who are not able to learn as efficiently online. We should not be punished for the coronavirus effects. Professors should just pass us for the semester because online classes will cause many problems for many students.”

The petition currently has more than 3,000 plus e-signatures from different VSU students. Thomas said that she hopes that her petition rewards students with what they deserve considering the current circumstances.

“We’re hoping that the petition will accomplish giving all students A’s as grades for every class and we chose to do all A’s because we don’t know a student’s plan,” she said. ” What if they planned to come back stronger after spring break? Their grades shouldn’t be determined by their acts before all of this happened. We all need A’s. With everything going on, it’s not our fault. We shouldn’t be punished but rewarded.”

Primalou Versailles, sophomore early childhood education major, is one out of the 2,000 plus signatures that Thomas has gotten thus far. Versailles said she signed the petition because of how the new online format could negatively impact some students.

“I feel like students have too much stress during COVID-19 by checking up on their loved ones who are affected by this,” she said. “Also, students do not have accessible internet at home, so it makes it harder for them to catch up with the class. Not to mention, lack of visual aid and hands on in the classroom is just a headache.”

Versailles also said that along with the mental strain that online classes can cause during this time, they could also cause health risks.

“Students who have seizures, like myself, cannot stare at a computer screen for hours at a time or else we would leave early and it would be impossible to catch up,” she said.

Olivia Smith, sophomore nursing and health major is another student who signed the petition and said that online classes won’t accommodate for some of the classes she’s taking which is why she supports the idea behind the petition.

“Personally, I’m taking specifically anatomy and physiology which requires a lot of memorization and it’s hard,” she said. “I like to take the material in the class and understand it especially the labs. We need to be in labs in order to really monitor a realistic progress in this science class.”

Smith said that other students should continue to sign the petition so that their voices are also heard.

“I think the petition is fair because of this disruption of this virus crisis. You don’t know what others are going through,” she said. “Others should sign it because it’s our word against them. It makes sense because don’t get me wrong classes can be completed online but the fact that this is a global crisis people can be going through mental health issues and other situations which can affect their GPA.”

Some issues with taking online classes have already been addressed by The University System of Georgia. For example, the USG has recommended that students who don’t have internet access should use charter spectrum internet which will have free broadband and Wi-Fi access for 60 days.

The university is also providing every student with an academic coach to help finish out the semester as well as Tutoring and supplemental instruction.

However, the petition is still getting a lot of support from VSU students. It’s also grabbing a lot of students’ attention and some students don’t agree with the general idea of the petition.

Nathan Arrowood, freshman computer information systems major said that the petition is not fair to students who have been working hard for their current grades.

“I get that people are going through a rough time with COVID-19 spreading like wildfire thanks to our government’s delayed response and all, but there’s no reason everyone should deserve an A grade halfway through the semester,” he said. “We aren’t paying thousands to get a participation medal, as far as I feel. Those who worked hard for their good grades will get lumped in with those who have parties every night, and it simply wouldn’t be fair if this sort of radical change was imposed on this campus.”

A senior computer science major who wishes to stay anonymous said that the petition is an impractical wish that simply can never happen.

“Wishing everyone gets an A is cute, but it comes down to A’s having more than just a pass rate. It affects GPA, statistics that have to be reported. It’s also 100% unethical to falsely give people one grade when it is unearned. There’s a reason grades are for evaluations. No evaluations no grades,” he said.  “If you are unhappy with the form of instruction that is a different matter that should be discussed. Maybe a tuition carryover for the following year for those who don’t want to take online classes. It just boils down to the ethics of the situation. Professors cannot and will not give a grade that is unearned and covid-19 struggles do not earn you a grade.”

Regardless if students support or don’t support the petition, Alize Ramos, freshman biology major, wants the petition that she created with Thomas to start a conversation amongst not only the student body but also the administration.

“I want this petition to have an incredible impact on campus. I want what Kya and the rest of us did to lead into people talking. I want students who don’t learn well via online to look at this as a positive in such a dark moment for some of us.” She said. “Why should we be expected to help pick up slack among our families as well as keeping our grades up? Those who disagree with us are talking as well. Whether they realize it or not, they are helping us spread our word, raising awareness for what we want.”