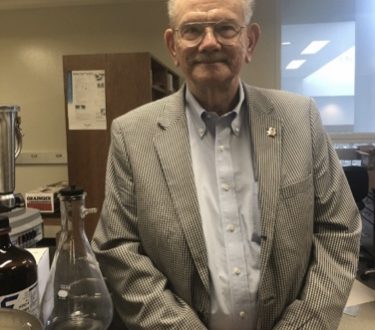 James Baxter, Chairman of the chemistry department, will retire from teaching at the end of the school l year after teaching for 47 years.

In Dr. James Baxter’s 47 years of teaching, he was able to see the changes of the university, students, and faculty at Valdosta State University.

Dr. Baxter, who is the chairman of the chemistry department in VSU’s College of Mathematics and Science, is the longest tenured professor currently teaching on campus, and will be hanging up his periodic table at the end of this school year.

Dr. Baxter graduated from Valdosta State College in 1966 with a Bachelor of Science in Chemistry and attended Georgia Institute of Technology for his master’s and doctorate.

Dr. Baxter wanted to be an industrial chemist but found his true calling as a teacher through teaching assistantships in graduate school.

“I found out that I really love getting up and teaching,” he said. “I never thought I wanted to become a teacher.”

The first year that he taught at VSU was the 1971-1972 school year, when he was a temporary teacher for a professor who went on leave. He became a permanent professor in 1973 and became department head of chemistry in 2002.

Through the years Dr. Baxter was able to watch the growth of the university.

He watched the construction of the Bailey Science Center and was able to transfer there from Pound Hall, where the original chemistry department was located.

Since he started at VSU as a student, he has also watched the chemistry department go from two professors to 12 professors.

He is also looked up to by his colleagues and brought many things to the table like funding for trips and bringing the faculty together.

“Of the 47 years, there have been many chairmen (of the chemistry department), and he is by far the best one and the most accommodating,”

Dr. Baxter said students’ preparation for school and students’ discipline has changed over the years, and social media has had a large impact. He said he believes technology has a place, but students must learn what that place is.

Dr. Baxter will be retiring at the end of the school year from teaching and finish administrative work in June.  He said he will miss teaching, but he knows that someone can’t do something forever.