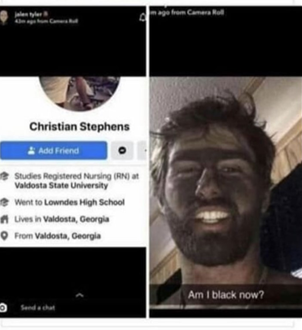 The VSU Community is upset about an offensive post made by a VSU student recently and are fighting for the student to be expelled.

Christian Stephens, a sophomore nursing major, posted a Snapchat showing him covered in blackface with the caption “Am I black now?”

Stephens has since deleted all of his social media platforms and has not responded to The Spectator’s attempts to contact him for a statement through email.

Although VSU sent out an official statement addressing the incident, students are still upset and would like to see more rigorous repercussions taken. Students have even made a petition regarding Stephens’ expulsion that now has over 3,500 signatures.

Faculty and staff are still trying to figure out the most effective ways to relinquish racial incidents on college campuses.

Some members of VSU’s administration feel that in order to solve the situation, Stephens needs to be educated through Student Diversity and Inclusion courses to help his understanding of why the situation is offensive.

Dr. Vince Miller, Vice president of Student Affairs stressed the importance of the Family Educational Rights and Privacy Act (FERPA), which protects any of Stephens’ personal information as well as conversations administration has had with Stephens.

“FERPA is a federal law that protects students but what impacts the institution when we violate FERPA is the ability for students to have federal financial aid,” he said. “That’s the punishment if the institution violates FERPA. There are things that happen behind the scenes that we do as an institution and we do them intentionally in the backgrounds because of FERPA but there are things that we do in the forefront as well, like programing education and brave spaces and in some cases we do in the forefront respond to a crisis.”

VSU student and NAACP member Jasmine Dasilva recalls various other racial events that have occurred in the past, however, and said that documents such as the Blazer Creed are used as a security blanket for the university in situations like this.

“I kind of feel like when we get emails that talk about the Blazer Creed, the university is using it as a security blanket, and no action is ever taken,” Dasilva said. “For me, being a black student, it is like a slap in the face. It’s like we’re told we need to be a voice and take action, and when we do it’s whatever and I hate that I feel that way. When I graduate, I’m going to be an alumni of a school that I don’t appreciate and it feels like I’m not appreciated being a black student trying to voice my opinion because it does get swept under the rug.”

Lauren Northup, also a VSU student, said she understands the frustration of the situation but said that students need to begin building their trust in the university so that the situation can be handled properly.

“I think it’s important for us as students to understand that as much as we want to hear what’s going to happen and as much as we want that sort of trust and affirmation with the situation, it’s important to also understand that there are legalities that are protecting all of us,” she said “Although it may not seem like justice, it’s silent justice. We have to come to trust the university is going to serve and it’s hard to trust the university considering some of the things that have happened in the past, but we have to find that trust again.”

Administration asks students to understand that they are handling the situation in the best way possible and will continue to look at all possible ways to handle the incident.