Blazer Week was held Oct. 12 – 16 to take place of homecoming, which has been moved to the spring, to help keep the Blazer spirit alive, according to Robin Vickery, the director of VSU.

On the first day , the Campus Activities Board hosted a bingo night in the third-floor Student Union ballrooms. Pictured are students at bingo night.

CAB provided $3000 worth of prizes for the winners, including a polaroid Camera, a TV, VSU merchandise and more.

On Tuesday, CAB also hosted a lunch on the front lawn where food trucks provided free food such as tacos, desserts and shaved ice. Pictured above are students attending the lunch on the lawn.

On Wednesday of Blazer Week, the Fire Pit hosted a T-shirt swap where students donated a shirt to get a Blazer T-shirt. 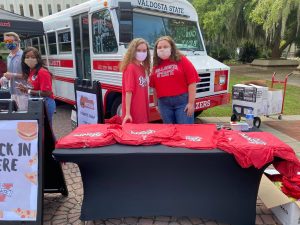 Other campus organizations also held small events on Wednesday, like the National Honor Society’s pumpkin paintings in front of the Student Union for five dollars a pumpkin. On Thursday, CAB was supposed to have a movie on the front lawn, but due to inclement weather, they had to move it to the third-floor ballrooms. Students were able to create DIY candied apples while showing the movie.

Blazer Week ended with a golf cart parade that went around the campus on Friday. The parade had campus organizations such as Student Government Association, CAB and the Red Hots. Throughout the week, Blazer Week also included campus scavenger hunts, sidewalk chalk and banner competitions that students would get a prize if they were to win.