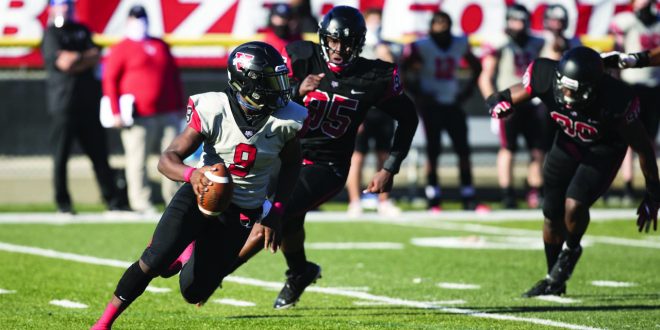 The VSU football team—split into two teams: Red and Black—returned to the field on Saturday, Nov. 14, in a high-scoring scrimmage that the Red team won by one point.

The Red team was up as the Black team was set to tie the game, but they wouldn’t have gone into overtime if the Black team had kicked the extra point to tie, so they decided to go for two. The attempt failed after an incomplete pass by senior quarterback Rogan Wells that soared out of the back of the endzone and the Red team held on for a narrow win.

The Red team was made up of mostly second-teamers, and the Black team featured the starters.

Due to the Red team’s predicted disadvantage, they were given a two-score lead to begin the game, starting out with a 14-0 lead.

The Red team had a dominant performance to start the game as they were up 42-21 at the end of the first half.

At the start of the second quarter, Williams took the reins for the Red team’s offense, and Jenkins stepped in for the Black team.

The Red team had two interceptions on back-to-back drives.

Jenkins threw a pass that was intercepted and returned for a touchdown by freshman defensive back Marcel Williams.

Wells stepped back in as quarterback for the Black team, but threw a pass that was once again intercepted by the Red team—this time the pass was intercepted by freshman linebacker Jalin Wilson.

The Red team went on to score on the following drive by way of a touchdown pass from Durham to freshman wide receiver Jaheim Jerry.

The two interceptions thrown by Wells and Jenkins, of the Black team, proved to be fatal for their chances of finishing the game with a win even though the Red team only scored once in the second half.

Throughout the game, Durham threw one touchdown and ran for two, including a short rushing touchdown, after he connected with one of his receivers on a 50-yard pass, that brought the score to 49-28 in the third quarter.

“It felt great to be out there with my brothers,” he said. “I thank God for letting us be out here today.”

The Black team, led mainly by Wells, struggled to put points on the board early on. However, Later in the game, the black team scored three unanswered touchdowns—a short rushing touchdown by Wells, a touchdown pass from Wells to senior wide receiver Brian Saunds and a rushing touchdown by freshman running back Khiari McCoy—to bring the score to 49-48.

Wells, who threw three touchdowns and rushed for another, reflected on the scrimmage and what football has been like in the shadow of COVID-19.

“This fall has been really weird,” Wells said. “We had to adjust a lot. We were left wondering what was going to happen as guys were constantly getting tested and just waiting to see what the results were.”

“I enjoyed it [the scrimmage]. I thought we played really well. We had a slow start and I had the two picks, but I think we picked it up when we went up-tempo with the offense,” he said.

The players were excited to be back in Bazemore-Hyder and see some action after a long off-season due to COVID-19.

“It felt good [to be back on the field] and brought a lot of energy to the team,” senior linebacker Nick Moss said. “I feel like it brought a competitive nature back to the team.”

Head coach Gary Goff was very pleased with what he saw from his team in the scrimmage.

“I couldn’t be more happy for our young men,” he said. “I am very proud of how they have showed up and worked extremely hard. To come out here today and have somewhat of a crowd and families out to watch, you know, today was a lot of fun.”

Between quarters, the 2019 national champion Red Hots performed for fans; fans had the chance to compete in punt, pass and kick challenges; and t-shirts were shot out of a cannon into the stands.