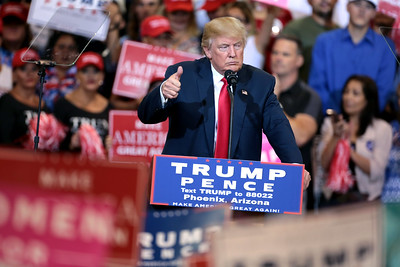 According to a press release from the Republican National Committee, on Dec. 5, President Donald Trump is set to visit Valdosta on behalf of Georgia Senators Kelly Loeffler and David Perdue.

The event is scheduled to take place at Valdosta Regional Airport at 7 p.m., and doors are set to open at 3 p.m.

Alongside Trump, Perdue and Loeffler, the event will feature Lauren “Bubba” McDonald, candidate for Public Service Commissioner, and other Republicans from Valdosta.

This is not the first time Trump has visited the city of Valdosta. Back on Feb. 29, 2016, Trump held a rally on VSU campus.

This proved to be a controversial decision, but the news that gained national attention was the decision to escort a group of black students out of the rally, and the reasons for doing so have been widely debated.

The news made headlines, with even the biggest of news sources such as Time and CNN picking up the story.

Given that our current political climate continues to be polarizing on issues such as political parties and racial injustice, this may prove to be an interesting choice during this time.

According to Microsoft News, city officials say that law enforcement is actively planning and preparing for Trump’s visit at this moment.

Previous Column series: What it’s like being a student journalist during a pandemic
Next Trump Travels to Valdosta, Holds Rally for Senate Runoff