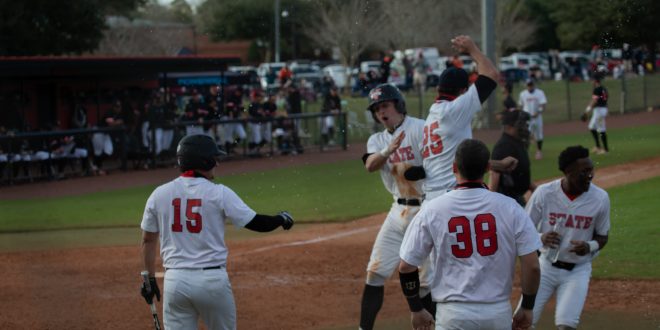 On Sunday, Feb. 28, 2021, the VSU Blazers held off the Shorter Hawks for a close 6-5 victory that ended their weekend series at Shorter with a record of 2-1.

Some clutch pitching helped the team improve to 8-4 on the season after a loss and a win in the doubleheader on Saturday, Feb. 27, 2021, against the Hawks.

Senior pitcher Zach Blankenship would get the start and the win for the Blazers. Blankenship stands at 2-1 on the season with a 3.44 ERA, allowing a .206 opponents’ batting average.

Blankenship faced down the first ten Hawks batters before allowing a runner on base off a walk in the bottom of the fourth inning. But, by then, the offense had already hung four on the Hawks.

However, the man on the mound for the Hawks was also dealing early. The Blazers struggled to get anything going until the top of the third after Ben Rowdon, a graduate student and infielder, reached first on an error.

Senior infielder Nick Lewis ripped one down the first base line for an RBI-double for the first bit of real success the offense had found.

Sophomore infielder EJ Doskow lifted the ball into the outfield to send Lewis around for another score. It looked like the Hawk’s pitcher was finally unraveling when senior infielder Jowenrick Djaanti got another quick hit. But both Doskow and Djaanti were left stranded when Doskow was picked off a couple pitches later.

The bats came back for the Blazer’s next inning with senior outfielder Chase Corker leading off with a single. After a balk, followed by a walk, a pitching change was necessary for the Hawks. An untimely error on the next at-bat loaded the bases for the new pitcher with no outs.

Redshirt sophomore catcher Ralph Morla Jr. hit a grounder hard back up the middle that the pitcher turned into a rare 1-2-3 double play to save a run and nearly escape the inning.

But Rowdon had the answer and dropped the ball in center field to drive home the two remaining base runners. At the end of the frame, the Blazers were up 4-0.

Blankenship finally allowed a hit in the fifth inning, only the second in his last 14. A couple little ground outs moved the runner to third and a passed ball resulted in the first run of the game for the Hawks.

The Blazers responded with a run in the sixth that would become key after the Hawks scored 3 in the next frame.

The Hawks got their second hit of the game from a one-out double and that was enough for coach Guilliams to pull Blankenship after 5+ innings. With the top of the order coming up, junior pitcher Jeremy Adams came in to relieve Blankenship.

The Hawk’s leadoff hitter hit the ball hard, but right to junior infielder Collin Teegarden at short. The dugout was only one out away for Adams, but he let a pitch hang over the plate a little too long. There was no question this one was gone, and it took a couple RBI’s with it.

Two more pitches yielded two more hits for the Hawks and, with two runners on, it looked like another ball was well on its way to the grass behind the centerfield wall. It bounced off the top of the wall, though, not before another run would score for the Hawks.

The next batter hit a grounder on a string to the first basemen’s glove to strand two runners amid a momentum-swinging rally.

The score was 5-4 Blazers after a quiet seventh inning, but the eighth started off with a solo shot from Teegarden that gave the Blazers an important insurance run going into the final couple of innings. It was the first homerun of the season for Teegarden.

The Hawks were looking to rally in the bottom of the ninth, down two. The leadoff batter hit a rocket that somehow didn’t go right through the centerfield wall for a double.

He was then sent home on a single that just barely made it over the outstretched arms of a diving Teegarden at short.

With the go-ahead run at the plate and no outs, the Blazers made a pitching change. Junior pitcher Jakob Barker took the mound for only the third time this season, this time in a tight game with an opportunity for a save.

However, second base was stolen as Barker threw his first pitch, which was a ball. The next two pitches were balls as well, giving the go-ahead run a 3-0 count.

Following the two balls was five pitches that were all strikes as Barkerstruck out the first batter and got ahead in the count with another who grounded out.

The last batter for the Hawks didn’t go down easy. With the tying run on third, and one base away from extra innings, Barker found himself with a full count. But a swing and a miss would be all she wrote as Barker sat down three straight to end the game for the Blazers with the save.

The Blazers will travel to Montevallo for a three-game-series against the Falcons next week. Game one is on March 5 at 5 p.m. Games two and three will be played on March 6 at 2 p.m.

Previous Editorial: It’s time to get back in gear, students
Next False allegations of attempted poisoning at VSU