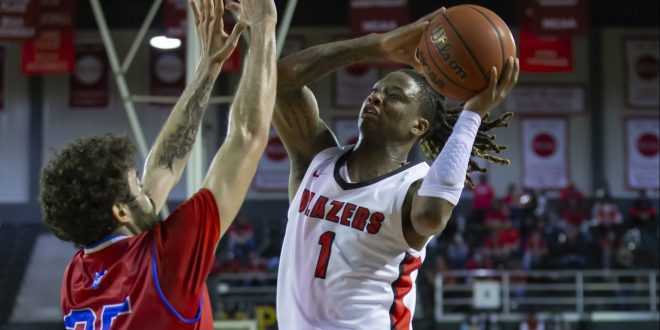 VSU made history with a victory over Alabama-Huntsville in the Gulf South Conference men’s basketball tournament championship game on Sunday to earn the program its first-ever conference tournament title.

The game took place at the University of Montevallo.

“You dream about this moment for so long,” coach Helfer said. “You just try to get in a position to win the conference tournament and today, we earned that, and we played great. It’s so hard to make it this far and it’s even harder to win it, and I’m just proud of my team for getting it done.”

The victory gave the Blazers an automatic bid in the NCAA Division II South Regional Tournament, which will be held at The Complex. The Blazers, who are the No. 4-seed, will face No. 5-seed West Georgia for another bout on March 13.

The Blazers were led by senior guard Burke Putnam, who recorded his third—and second consecutive—double-double leading the team with 28 points, 12 rebounds, and seven assists. His efforts earned him Most Outstanding Player honors for the tournament.

The victory over the Chargers capped off what was a strong run through the conference tournament that included victories over Delta State and archrival West Georgia. Both matchups took place at The Complex.

In their quarterfinals matchup against Delta State, the Blazers were able to put some distance between them and the Statesmen in the first half, taking a 49-30 lead into intermission. The Blazers went on to win 88-69.

The Blazers had a much more difficult time in their semifinal win over West Georgia. The Blazers were down 45-36 at halftime and needed a late surge to pull away from the Wolves and win 99-89.

Putnam also played a huge role in the Blazer’s win over West Georgia. Putnam again led the team in points (25) and rebounds (13).

Putnam, as well as the rest of the Blazers, were able to capitalize at the free throw line late in the game.  The Wolves had two players foul out as the game came to an end.

Putnam was frequently sent to the line, and he made the most of it, shooting 8-9 from the line.

Along with clutch free throw shooting, the Blazers got a huge lift in the final minute of the game when junior forward Maurice Gordon had a game-clinching block at the basket.  The block came at just the right time, as the Wolves were trying to mount a late rally and were down by six points.

Coach Helfer gave a lot of credit to the fans for the win.

“We finally got to play this game, you know, near our fans in our arena,” Helfer said. “Our fans are a factor. That’s why this is a hard place to win, and it was nice to have this game in front of our fans.”