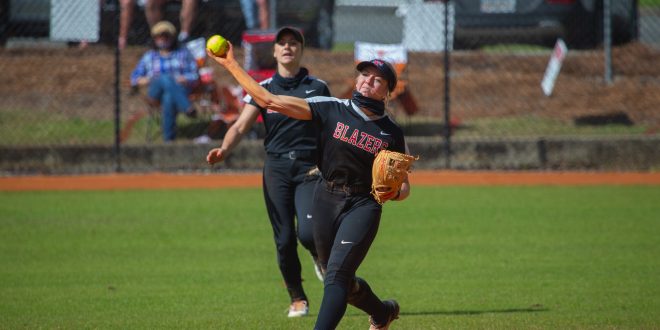 The VSU softball team looks to continue their hot streak as they take on West Alabama in a three-game series on Saturday and Sunday at Steel’s Diamond at Blazer Park.

The Lady Blazers enter the series at 22-3 overall, including a 16-2 record in Gulf South Conference play.

The Lady Blazers moved up to No. 3 in the latest National Fastpitch Coaches Association (NFCA) Division II Top 25, receiving one first-place vote.

West Alabama enters the series at 13-15 overall, with a 9-12 record in GSC play, but is on a two-game winning streak.

“We can’t put too much focus on any one player,” Macera said. “If we overlook one player, they might be the one who winds up hurting us. We’ve had the ninth player in the batting order homer against us just as much as the first player.”

The Blazers are riding an 11-game winning streak heading into the series, but the streak hasn’t been easy to maintain.

Macera credits the team’s perseverance in the series against the Lady Statesmen.

“They don’t panic when faced with adversity,” Macera said. “Every game is different; we can’t expect to go out and blow out every team we face.”

Junior shortstop Nicole Pennington was a key contributor throughout the series.  She went .500 for the series, recording six hits in her 12 at-bats.  She also earned four runs, including one home run.

“I try not to think too much when I’m at the plate,” Pennington said of her performance. “I only think about the ball and making sure I can have a positive impact for my team.”

Despite the hot streak, neither the players nor the coaches are feeling pressure to keep it going.

“We’re just going to keep doing what we’ve been doing,” Macera said. “We’re going to take things one game at a time.”