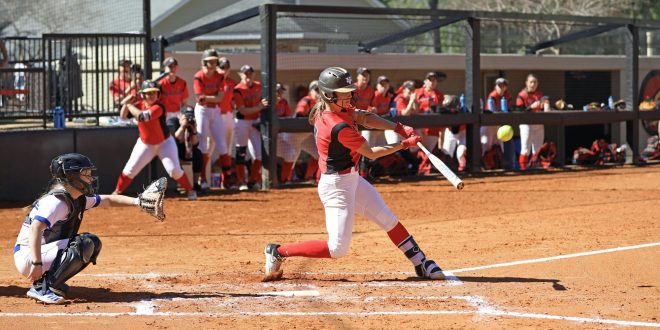 At the end of the season, four Lady Blazer softball players will be hanging up their cleats.

Crandall, Hill, and Lamb were all initially set to play their final seasons in 2020 before the coronavirus pandemic shortened the season.

All four players saw playing time during the season. The VSU softball team is 32-3 and 25-2 in Gulf South Conference play and is currently riding a 21-game winning streak.

Crandall, who is a catcher and hitter for the softball team, is a mass media major who has spent her entire career at VSU. After redshirting in 2016, Crandall has played in 218 games with 216 starts.

“I loved the home games during my time here,” Crandall said. “Just being able to play in front of our fans has been a blast.”

During her time at VSU, Crandall has maintained a .289 batting average while also having 16 home runs. Following the conclusion of the season, Crandall plans to work at Valdosta Veterinarian Associates as their social media and website manager.

Hill, who is majoring in health science, has been playing for VSU since 2018 and has started in 160 games. Prior to her time at VSU, Hill spent two years at USC-Upstate.

“I just love how well we are playing this season, so I’d have to say that’s my favorite moment as a Blazer,” Hill said.

Hill has batted a .329 average in her career at VSU, including .359 this season. Hill plans to go to physical therapy school to get her doctorate after the season is over.

Lamb, a pitcher for the softball team, has spent her entire career at VSU, going 23-9 with 64 appearances in 33 starts.  Lamb is majoring in business and is planning to be a graduate assistant for the team next season.

“I love this team; everybody loves each other,” Lamb said. “There was a time during the West Alabama series where some of their players were arguing in the dugout, and we just go, ‘That happens on teams?’”

Robb, like Hill, is majoring in health science and is planning to get her doctorate in physical therapy. Robb has spent time playing infield while also batting a career average of .357.

“I have loved my time here as a Blazer, but this season has to be my favorite moment,” Robb said. “This has been a very special team, and I’m glad I have gotten to be a part of that.”

The Lady Blazers will end the regular season with an away series in Huntsville, Ala. against the Alabama-Huntsville Chargers on May 1 and 2.