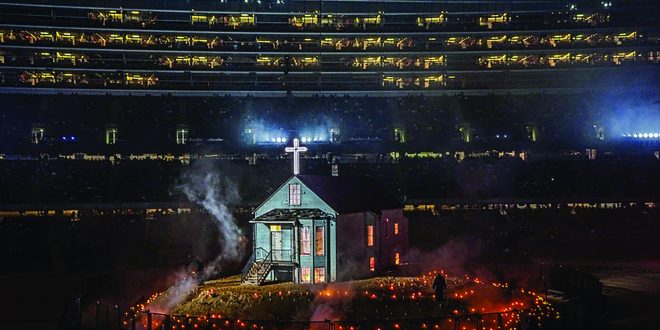 The drop of this album came with a lot of antics, and when actually listening to it, it becomes a cohesive body of work.

The beginning of the album starts with the song ‘Donda Chant’. It is an eerie chant of West’s mothers name by Syleena Johnson, R&B and soul singer and songwriter.

Many have speculated that the different rhythms in the Donda chant were the last heartbeat of Donda. The song sets the uncanny tone for the album.

The next few songs after ‘Donda Chant’ are ‘Jail’, ‘God Breathed’, ‘Off the Grid’, ‘Hurricane’ and ‘Praise God’.

Even though West is on the tracks rapping, it’s really his features that carry the verses of the songs, especially Jay-Z on the song ‘Jail’ with his word play, Fivio Foreign with adding a flawless verse and head banger to ‘Off the Grid’ and The Weeknds’ amazing vocals on ‘Hurricane’.

The only song where West gives his personal feeling of everything happening in his life right now would be the song “Jesus Lord.” He explains his thoughts in wishing if he could bring his mother to life. Also, questioning if he died right now, would he be able to see his mother in the afterlife.

Besides the song ‘Jesus Lord’, the album itself really had no connection with West’s late mother, besides her speech coming on to song ‘Praise God’. Even when you heard her voice, she was talking about West.

It was very unclear what West’s intentions were with this album when listening to it. It didn’t really have any emotions on his standpoint of his divorce with Kim Kardashian, no standpoint of his beef with other rappers or just his life in general.

The songs really feel like a clutter of songs that don’t go together. The only thing that really brings the songs together is the word play of using West’s mom, Donda.

At the listening parties, there were a lot of antics going on with West from recreating his childhood home to setting himself on fire.

He also brought out special guests that had a lot of controversy around them like DaBaby, a rapper that made homophobic remarks at Rolling Loud, and Marilyn Manson, who is an alleged rapist.

West also made his ex-wife Kim Kardashian come out in her wedding dress signifying her as the virgin Mary. The listening party was very ironic of the religious themes West had and the people he brought as guests that did not follow or went against these themes.

In all, the album was very confusing, but there are a few good songs that might grow on people. People really have to experience the album themselves, so they can develop authentic feelings on West’s album.