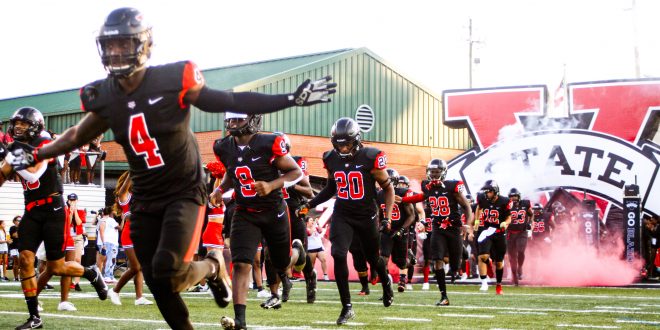 After 644 days without football here at VSU, the Blazers returned in dominant fashion with a 53-7 win over Savannah State.

The offense, led by quarterback Ivory Durham, running back Seth Mcgill and wide receiver Lio’undre Gallimore, was dominant, racking up 395 yards of total offense with four touchdowns in an almost flawless act against Savannah State.

On the opening drive, VSU committed to their ground game. The drive was capped off with a one-yard touchdown run by Mcgill.

Savannah State’s first possession ended in a turnover after a fumble was forced and covered up by the defense.

VSU continued to pound the ball with runs and quick passes before Durham connected with Gallimore for his first touchdown pass of the new season.

The defense held their ground all game against Savannah State’s heavy read-option offense. Savannah State was led by quarterback D’vonn Gibbons, who ended the game with just 46 rushing yards.

“I’m very excited about our defense,” head coach Gary Goff said. “We have some really good depth over there. Coach Semore and the defensive coaches have done a great job of being aggressive all camp, so I expected us to force the issue on that side of the ball, stop the run and create turnovers.”

When VSU’s offense started to slow down, the special teams unit started making plays. A punt bounced off of a Savannah State returner and resulted in a scoop and score for VSU.

As Savannah State took the field on offense in the second quarter, history repeated itself as they lost another fumble to VSU, who ran it in for another defensive touchdown.

VSU was hitting on all cylinders throughout the game.

The second half was the same story as the first as VSU came out ready to continue running the football. Mcgill and Jamar Thompkins continued to dominate on the ground, each recording a rushing score.

VSU forced a safety in the fourth quarter, but with the help of a pass interference call, Savannah State finally had their opportunity to put points up on the board.

That would be the one and only time Savannah State’s offense managed to get into the endzone.