Home / Sports / Lady Blazers and No. 9 West Fla end match in a draw 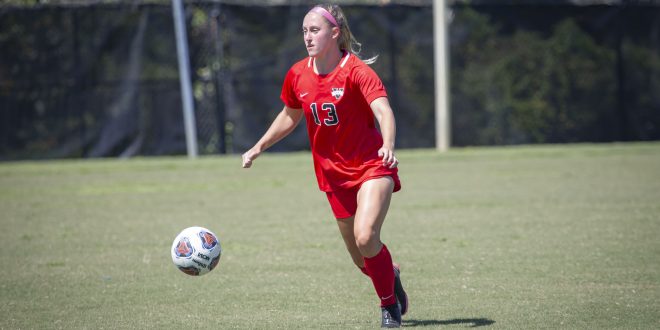 Lady Blazers and No. 9 West Fla end match in a draw

A stellar defensive performance from VSU is what kept this game a tie as West Florida outshot VSU 21-4. Junior Samantha Blanford was blocking off shots all game with 11 total saves and saving a potential game-winner in the first overtime.

“Sam Blanford has been good,” head coach Stephen Andrew said. “I think they had a lot of shots from distance, so defensively, we kept them in front of us. We don’t want runners getting behind us defensively. Lexie and Courtney have been unbelievable.”

Andrew said a tougher opponent couldn’t have been picked for the first conference game of the season.

VSU offense was nearly non-existent for the majority of the game as West Florida took control of the ball at every opportunity during the first half.

“But I’m proud that we battled as the game wore on,” Andrew said. “We grew into it . . . I thought we had some really good chances to win.”

The second half began a different story for the Blazers as the offense started to gain steam getting past the West Florida defense. VSU’s defense tightened up as well, only giving up six shots on goal compared to the 11 shots on goal they let up in the first half.

Freshman Ansley Decenzo’s only shot of the game was the potential game-winner but was then saved by West Florida’s goalkeeper Kelsey Brann. The score sat at 0-0 at the end of regulation.

Overtime began and West Florida’s defense looked fatigued as VSU strikers maneuvered swiftly past the defense, but the lack of help in the corners led to missed scoring opportunities.

Junior midfielder Lyana Steele picked up a yellow card at the 98-minute mark, which would be her second yellow card of the season so far.

After another 0-0 half, the game entered the second overtime period, which would be the last half of the game.

Both teams missed out on potential game-winning goals, but both attempts sailed over the net.

“It feels good to tie with one of the top teams,” graduate student Lexie Hall said. “It’s a big step in this program, and it’s very good for this team.”

With this tie, the Lady Blazers now have a 3-1-1 record and start conference play with a 0-0-1 record.

Previous Column: COVID-19 brings uncertainties to studying abroad
Next Are you offended by these team names or just bored?