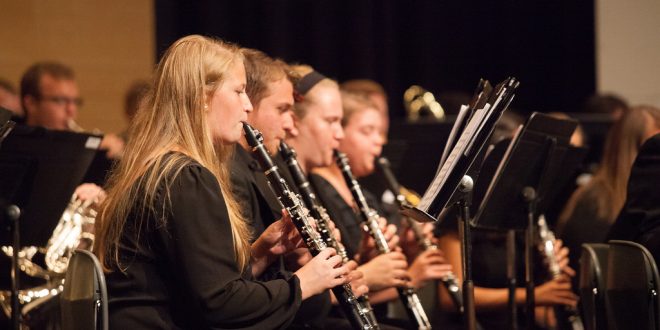 On Thursday Sept. 30, the Department of music’s Wind Ensemble had it’s first performance since the pandemic started.

Dr. Benjamin Harper, director of the band, said it has been a total of 19 months since the last live performance.

“We have tried to do some pop-up performances back in 2020, but some were cancelled during the winter season, and with that, there was hardly any advertisement for those performances,” Dr. Harper said. “Also, most of the performances were only video and audio recordings that were uploaded to our YouTube channel.”

Dr. Harper also said the students have been working hard for this performance.

“We practice three days a week to start working on the song, and during the last week, we start to put all the details together and go through sound checks,” Dr. Harper said. “Also, students do their own sectionals out of class with their section leaders for improvement”.

According to Dr. Harper, the best safety precautions they can do is highly encouraging asks and place seating 12 feet apart.

“The students also have safety precautions of their own, they have containers where they can empty their spit caps so it will not fall onto the floor and cause any germs to the stage,” Dr. Harper said.

Since Dr. Harper is unsure on how the outcome would turn out for the concert, those who could not make it were  able to watch the stream on the bands YouTube channel, he said.

Dr. Harper says he would be thrilled to perform live again.

“I’m thrilled [because] you don’t realize what you have until its gone,” he said. “Since it’s been so long, this performance is extra special, and the student have done a wonderful job with rehearsal and are just great in general.”