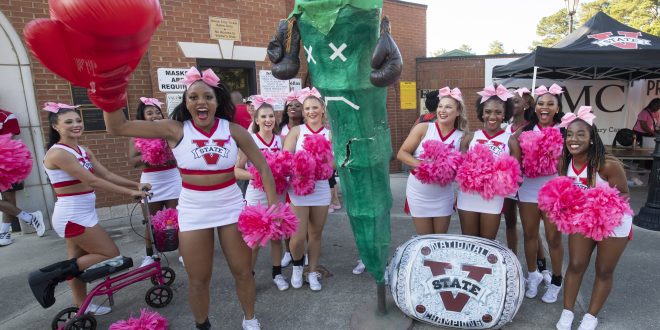 Taylor Mahon, from Jacksonville, Florida, is 19 years old and a VSU cheerleader.

She started cheering at just five years old when her mom introduced her to River City All Stars, a cheer gym in Jacksonville.

“She has taught me so much more than just cheerleading,” Mahon said.

Mahon decided to cheer in college because it was a great way for her to get involved in the community at VSU, and it has been a life-long passion.

“It’s all that I’ve ever known,” Mahon said.

The first step for Mahon was to show off her skills for the coaches, but since the country has been experiencing a pandemic, she would have to do so virtually.

“Since I came in at the peak of COVID, we had to do video tryouts,” she said. “We showed ourselves doing a cheer, band dance and tumbling as well as stunting.”

The success that VSU Cheerleading has seen through the years is what drew Mahon to the program.

“Ever since I knew I wanted to attend VSU, I followed the cheer team to see what I was getting myself into,” she said. “I knew that they had won multiple national championships, and I would love to win one.”

Her goal is to win nationals in Daytona with the cheer team, and her favorite memory is when the whole team hit—or executed—its routine perfectly on the first day at nationals last year.

“It was the best feeling I have ever felt,” Mahon said.

Unfortunately, Mahon suffered an injury this season that resulted in a broken toe and greatly affected her season as she was forced to wear a boot.

Being there on football game days, helping to hype up the players, is one of Mahon’s favorite things about being a cheerleader besides competition.

“My favorite part of game day is the Blazer Walk and getting the boys ready to win,” she said.

Mahon is studying elementary education, and she plans to be a kindergarten teacher as well as own her own cheer gym one day.