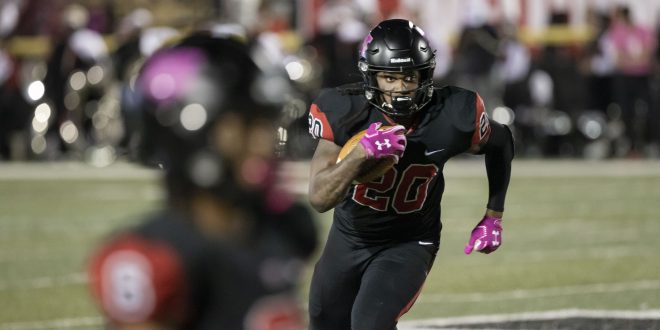 No. 2 VSU continued its undefeated season, steamrolling Mississippi College 41-14 on the road.

VSU received the opening kickoff and got straight to work.

The running game paved the way for the offense, as they found themselves in Mississippi College territory after a 27-yard run from Chaney. The Mississippi defense bent but did not break after allowing only a field goal on VSU’s opening drive of the game.

Mississippi opened their first drive with a collection of good runs, but redshirt sophomore Jance Riley missed a 33-yard field goal that would have tied it up.

Durham got the VSU offense going when he punched it in on a 32-yard rushing touchdown at the top of the second quarter to make it 10-0 in VSU’s favor.

During the Choctaws’ next drive, VSU’s shutdown defense was on full display as defensive lineman Brian Williams recorded a sack and defensive back Taurus Dotson recorded an interception on back-to-back plays.

VSU’s first drive of the second half was led by the rushing attack of McGill and Thompkins, as Thompkins managed to score on a four-yard rushing touchdown.

The Mississippi offense gained some momentum in the fourth quarter as junior quarterback Tytus Heard carried the ball himself a few times and set himself up for a 1-yard rushing touchdown to finally put points on the board.

McGill and Flowers continued to run through the Choctaws front seven, as they each scored a touchdown on the next two drives to cap VSU’s scoring in the game.

Mississippi would continue moving the ball on the ground during their next drive, which would end with a 34-yard run by junior slot receiver Marcus Williams.

Williams’ score was the second and final touchdown that the Choctaws would score all game.