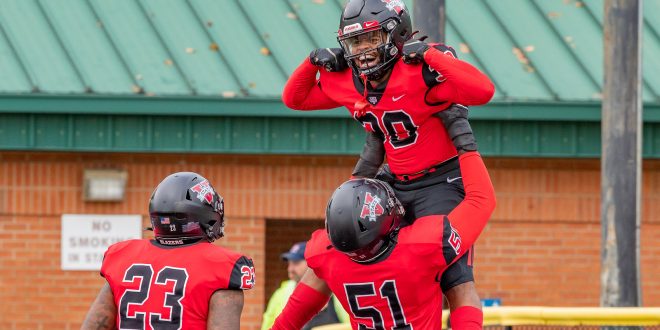 After both teams traded punts, the Crusaders struck first on a 6-yard run from quarterback Kaelan Riley. For the first time all season, the Blazers were held scoreless in the first quarter.

VSU players pointed their slow start towards a bad week of practice.

“During the week, we didn’t execute like we wanted to, and it showed this week,” junior running back Seth McGill said. “We’re going to have to come back next week and practice and do our job.”

VSU was able to get on the board early in the second quarter as McGill punched it in from four yards out. McGill scored again later in the quarter, this time on a 9-yard run.

McGill finished with 39 rushing yards in the game but had three rushing touchdowns.

“Our offensive line was blocking really great,” McGill said. “Everything was kind of clicking; well, it wasn’t clicking in the first half but started clicking in the second half.”

VSU scored again in the final seconds of the first half, with junior quarterback Ivory Durham finding graduate wide receiver Brian Saunds for a 24-yard touchdown pass. It capped off a huge first-half performance for Saunds, who reeled in 10 catches and had 123 yards.

Saunds continued his big performance in the second half, adding five more receptions and 97 yards to his totals. Saunds was named GSC Offensive Player of the Week for his efforts.

“It’s just the opportunity when it presents itself,” Saunds said. “You’ve got to take advantage of opportunity. We’ve got a bunch of good receivers. If [Lio’undre] doesn’t get open, I get open. If we don’t get open on our side, we have [Victor] Talley and Travon [Roberts]. There are so many weapons, and when you get your chance, you take advantage of it.”

VSU was able to pad their lead in the third quarter with a 3-yard run from McGill. It was the only score of the quarter.

The Blazers stretched their lead further with a 22-yard field goal from sophomore kicker Estin Thiele. North Greenville would trim the lead back down to 10 with an 18-yard run by Riley but was unable to get the ball back as VSU drained the clock to close out the win.

Looking ahead, head coach Gary Goff stressed the importance of playing better football for the rest of the season.

“We’ve got to make sure that we are playing really good football from here on out,” Goff said. “Next week starts round one of the playoffs—no matter how you look at it. You get a win next week, and that’s a conference championship and a first-round bye. If you don’t, you don’t know where you’re going to land in the playoffs.”

Previous People Poll: What did you do for Halloween?
Next Sign Language community well served at VSU