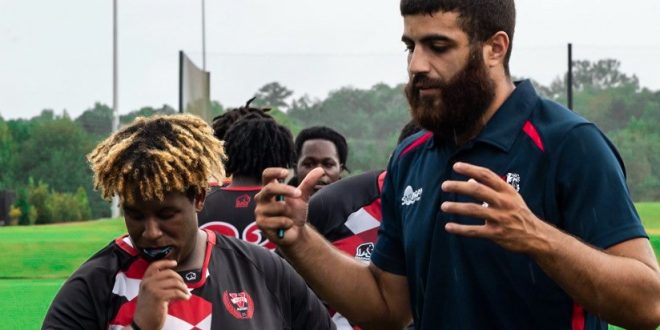 One thing that Nita says bothers him since leaving VSU in 2019 is: He was never able to pull off a successful playoff run.

He hopes to change that narrative as head coach.

Nita began playing rugby when he was in high school back in 2014.

“All my buddies wanted me to play, and at first, I just wasn’t down because of the thought of wearing those shorts, and I wasn’t a fan of the contact without pads,” Nita said. “Eventually, they talked me into going to a practice, and I actually kind of liked it because I was able to run the ball. I never really got to run the ball too much in football in high school. From there, honestly, that’s when I just fell in love with the sport.”

This decision changed his life.

In 2015, he led the state of Ohio in scores for sevens and began to fully transition from a football player to a rugby player.

In late 2016, Nita went moved over 15 hours south of Ohio with his family to attend college here in Valdosta.

“I originally wanted to switch back to football because of the good teams down here, but rugby was the next closest thing,” he said.

During his tenure as a player for the Blazers, he accumulated three NSCRO All-American titles and even represented VSU on the USA South Panthers U-23 team in 2019.

Needless to say, Nita’s days as a player for the program solidifies him as one of the top 10 players to come through Valdosta.

However, this chapter of VSU Rugby places him in the driver seat instead of on the field.

“We started the pre-season practices off with five or six consistent guys, and now we can get an easy 20 to 22 guys out thanks to recruiting,” Nita said. “All the guys are very hungry to win, they’re all competitors and [they’re] all focused on the same goal. Everyone says that this is a rebuilding year, but I don’t look at it like that. It’s just one small step to achieving our main goal.”

That main goal he’s referring to is winning the South Cup.

VSU rugby was established in 2010 and in the 11-year span since being created, VSU has always qualified for the playoffs without winning a playoff game.

This is something every player who’s ever suited up for VSU has attempted to change and—unfortunately—fell short of.

So far, the Blazers have gone .500 on the season with one of their wins coming against Georgia College in the first home game since 2019.

This win qualified them for the South Cup Playoff Tournament against the representatives of Florida, Alabama and Tennessee.

“The thing I like about this team is that win or lose, everybody on the roster is bought into bettering themselves as a player week in and week out,” current VSU Rugby president, Tyler Pierce, said. “As the president, that’s really all I can ask for.”

A big problem for many sports teams this season is turnover ratio due to COVID-19.

With collegiate sports being placed on hold for a year, this meant that players were held accountable for keeping themselves in shape as well as mentally learning more about the sport on their own.

You would think this would be a big problem for the Blazers, but apparently not.

“After the year off we came back with five guys and immediately started to build,” Nita said. “Before we knew it, we had more numbers then we’ve had in years.”

Some players who joined had previously assumed that rugby wasn’t for them, but have seen the light since then.

“Never in a million years did I think I was going to play this sport,” rookie Landon Arnold said. “I always thought it was stupid watching people run at each other full speed with no pads on. After a couple practices, I was like ‘Ok there’s actually more to it. (Rugby) is actually fun’”

Coach Nita definitely has his hands full this season, considering over 60% of the team are first year players.

However, with South Cup approaching in less than two weeks, Nita has made it clear that inexperience will not be an excuse.

“With the look I’ve seen on these guys faces, I think it is possible,” Nita said. “They all want to win. They all hate losing. They’ll do anything that they can not to lose. We’re not playing with an underdog mentality but we also want to play smart.”