Home / Sports / Football / A conversation with Bill Connelly of ESPN 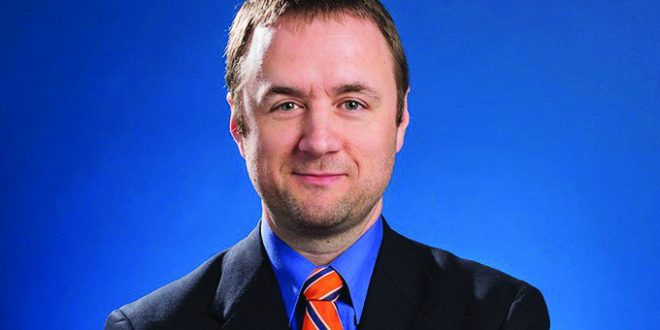 Bill Connelly is a sportswriter and analyst at ESPN who covers college football. He attended college at the University of Missouri and still lives in Columbia, Missouri, today. Early in his career, Connelly started out as a sports blogger writing for Football Outsiders. In 2011, he began writing fulltime with SB Nation. Finally, Connelly was brought on by ESPN in 2019. In this interview, we talked with Connelly over the phone about the NIL ruling, Division 2 athletics and VSU football.

How important is it for lower division schools to get the necessary coverage in comparison to the “big dogs” of college athletics, especially with recent developments like the NIL ruling?

“The NIL thing is kind of interesting in the effect that it might have. Obviously, there are so many pockets of really high-quality football at the lower levels, whether it’s FCS or Division II or even Division III and beyond—just small schools who know what they’re doing. These schools are going to identify the right talent for them, develop those guys, build huge advantages and win a lot of football games and that doesn’t have to change with NIL. That wouldn’t necessarily change with any sort of national coverage because you’re probably recruiting locally anyway. Just as NIL has benefited, you know, a lot of athletes in the Olympic [style] sports—volleyball players or track stars or whatever—you could certainly see it benefiting local kids that very successful small schools like VSU recruit. So, just to circle back around, I think that national coverage certainly can’t hurt, but a lot of schools have been playing really good football without all that much national coverage already. So, you know, I guess that would just be a bonus.”

“Oh, I mean, I never thought it would be bad. It never seemed like it would have much of a negative impact, and it certainly hasn’t so far. I will say that this first year, I think a bunch of companies and a bunch of people are just throwing stuff at the wall to see what sticks. I think we’ll see what happens over the coming years in terms of who changes their approach and whatever, but I never saw any realistic reason to believe that it would have a negative impact, and it certainly hasn’t yet.”

You’ve had a string of articles and social media posts covering various metrics throughout college sports, including football. Seeing as college athletics are moving more towards metrics to help rank and seed teams in postseason tournaments, how do you think sports journalists should cover these stats to make them understandable for a general audience?

“You know, I don’t think everybody has to have a math degree or anything. But I mean, I think it certainly would pay off to kind of be aware of what’s out there in terms of, you know, advanced stats and kind of understanding the landscape and understanding how schools are using the numbers that they have at their disposal now. I mean, it has changed fourth-down decision making a decent amount, and there’s just a lot more to keep track of. You see a lot more people with analytics-based titles in athletic departments or even on football coaching staffs. So, I think understanding the landscape is good even if you don’t dive all the way into what everything means or create your own rating system or whatever. I think understanding the landscape is a very good thing for journalists or potential journalists to do.”

We see a lot of Division I teams moving from the FCS to the FBS. Based on what you know about VSU, do you think a school like VSU is ready to move up to the Division I FCS level?

“The top half of the Gulf South would hold their own just fine in the FCS immediately. I think that’s pretty clear. I was looking back through my SP+ rankings for the season and, right now, even with the loss last week, West Florida is still second, VSU is still first, West Georgia is sixth and West Alabama is 21st. They were all in like the top eight six weeks ago. So, I mean, I think just that region has so much talent available to it. VSU would certainly compete, at least at an average level, in FCS without any changes; but you figure with the support they have that they would be able to invest well and make use of more scholarships that would be available to them in FCS. I don’t see why they wouldn’t succeed. Just like we’ve seen, you know, the App States of the world go up to FBS and prove that they can invest in and support the program at that level. I don’t see why VSU couldn’t do the same at the FCS level.”

I feel the same way. Especially after seeing what Sanford did to Florida a few weeks ago.

“There’s a big middle ground area in college football and, obviously, only so many schools are going to be able to, you know, recruit blue chippers and play at a top 10 or 15 level in the FBS or whatever, but I mean, there are so many schools that, investing appropriately, could punch in a pretty high weight class, we’ll say, whatever that would be. I certainly don’t see why VSU couldn’t be one of those.”

Valdosta State typically excels across many sports, including football, but how do you think we stack up against the rest of Division II?

“I mean, from a numbers standpoint, they seem to be the favorite. You know, obviously, the biggest issue right now is the talent level in region two and region three, specifically, the super regions. It just means you have more hard games to play. Like having to play West Georgia this weekend is kind of crazy this early in the tournament. So that’s the biggest thing. That’s the biggest obstacle they face is, you know, they’re going to have to win four really hard games. You know, maybe the quarterfinals are a little lighter in terms of the quality of opposition, especially with West Florida out, but it’s still at least three really, really high-level games they’re going to have to win as opposed to, you know, regions one or four where maybe you can get by with at least one more game against a lesser team. So, that’s going to be tricky, but I think the odds for them are as good as anybody else.”

In the past, you’ve included VSU games in your rankings of top 50 small school games. Have there been any games this season worthy of that distinction?

“I don’t know specifically yet. I know the first Ferris State vs. Grand Valley game was really good. You know, I guess the Valdosta vs. West Florida game was less so, but I mean, I’ll have to go through and figure that out. I do a Top 100 Games of the Season list after the season’s over, and that’ll definitely include a small school section in it because there’s just so much, and the further you dig into small school football, the more gems you find.”

VSU was undefeated until the regular season finale against West Florida, but we still maintain the No. 1 seed going into the playoffs. What’s your opinion on that? Do you think VSU should have been bumped down a little bit or did we deserve the No. 1 spot?

“My numbers still had VSU at No. 1, although it’s very tight margins. I can, at least, understand the logic. However, West Florida beat McNeese State at the FCS level, and it’s kind of weird that we don’t count that. I kind of hate that. That doesn’t make a lot of sense to me. Maybe that would have pushed West Florida over the top and given them No. 1 seed, but I still think VSU is one of the two best teams in the country heading into the tournament, and therefore, I can’t complain too much. I certainly know why West Florida would have been annoyed by it, but I mean, VSU is still really, really good.”

Why would you say VSU football has been so successful, even though we don’t have any particular superstars or stat-leaders?

“Well, look at UGA right now at the FBS level. They don’t have any Heisman contenders. They have gotten to where they have this year with a lack of specific standout talent. I mean, that’s fine, but when you average over 42 points a game, you allow under 18 points a game and you’ve got quality and depth just about everywhere—a couple different running backs and whatnot—it just seems like the teams with the most well-rounded talent overall are the ones that are going to be the most capable of making big runs. So yeah, I mean, maybe the best defensive end, best quarterback, best whatever are at other schools, but VSU is pretty stacked across the board, and that’s going to serve them well.”

Answers were edited for clarity.