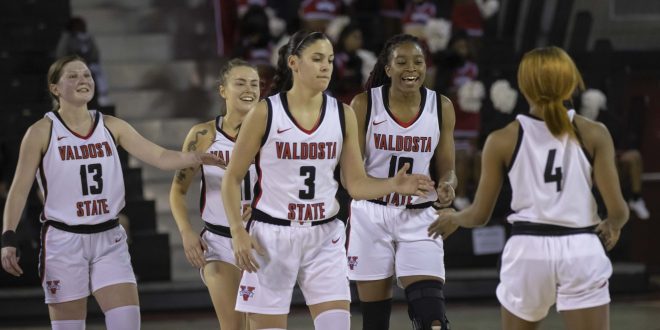 The VSU Lady Blazers defended the Complex this week, winning a pair of GSC home games to improve to 13-2, and 8-1 in Gulf South Conference play.

VSU first beat Delta State behind an impressive defensive outing, holding the Lady Statesmen to only 35 points in a 47-35 win at the Complex Thursday night.

It was the Lady Blazers best defensive game, at least in-terms of points scored, since Jan. 4, 2013, when they beat GSC opponent West Alabama 70-20.

Graduate student center Kwajelin Farrar led the way for the Lady Blazers on both ends of the court, finishing with a game-high 11 points and adding five rebounds.

Farrar’s paint-presence was huge for the Lady Blazers who held DSU 13-47 on field goals for the whole game (27.6%).

Jumpers were falling for the Lady Blazers out the gate to take an early lead in the game, but then got cold as the first quarter wore on and DSU was able to take a brief lead.

The Lady Blazers took the lead back going into the second quarter, and from there, Farrar put in the work down low scoring and passing to extend the VSU lead. Five minutes into the quarter the Lady Blazers had it up to double digits.

The rest of the half was relatively quiet for both teams as the Lady Blazers took a 28-17 lead into halftime.

Coming out of halftime the Lady Blazers struggled to score, hitting only one shot in the third quarter, but they kept up the defensive intensity as they held DSU to just three makes in a tight 8-5 quarter.

Even so, it looked like the 8-point lead that the Lady Blazers were clinging to going into the final quarter might be in jeopardy, but they never let up on defense. Farrar sank four straight free throws and DSU would never get closer than seven as time ran down.

Farrar was the only Blazer that scored in double figures, but graduate student Mallory Odell, senior Delaney Bernard, and sophomore Lili Long added seven a piece.

Sophomore point guard Francis Tamiya did most of the distributing for the Lady Blazers with six assists.

VSU used big quarters to start and finish the game to beat the Mississippi College Choctaws 76-58 on Saturday afternoon.

The Lady Blazers exploded out of the gate for a 20-2 lead, while the Lady Choctaws missed their first 11 shots. It looked like the crowd at the P.E. Complex were in for another dominating defensive performance.

However, midway through the third quarter the Lady Choctaws had gotten the VSU lead down to three. The Lady Blazers fought back to a double-digit lead by the buzzer but going into the fourth up 45-55 it was anybody’s game.

The Lady Blazers promptly went on a 13-0 run to open the final quarter, burying six straight jumpers to take the life out of the Lady Choctaws.

Sophomore guard, Tamiya Francis, hit a couple shots during that run, including the fast break jumper to punctuate it and force a time out from the Lady Choctaws. Francis led the way for the Lady Blazers the whole game, pouring 17 points – her season high.

The rim was a little wider for the all of the Lady Blazers that afternoon. Even in warmups it seemed like every shot found the bottom of the net.

The hot shooting continued after the game started as the Lady Blazers were able to hold on to a 20-point lead for nearly the first 17 minutes of the game.

The Lady Blazers finished 48% from the floor, but more importantly shooting 53% from three against the Lady Choctaws, hitting 9 of 17.

Conversely, they held the Lady Choctaws to only 34% from the floor and 32% from deep.

It’s been a season full of impressive defensive performances for the Lady Blazers who are currently first in the GSC in scoring defense allowing only 53.3 points per game. That’s three points less than the next closest team, and nearly ten points less than fifth place.

The Lady Blazers also made use of their trips to the line on Saturday, going 19 for 23, bolstered by Francis’s perfect 6 of 6 and Graduate Student forward Nicole Heyn’s 4 for 6 day.

Heyn had a big day for the Lady Blazers when she wasn’t at the line too, finishing with 16 points and 10 rebounds.

The Lady Blazers are on the road this week for a pair of GSC matchups. First on Thursday, Jan 20, they play Christian Brothers in Memphis, TN, with tip off scheduled for 6 p.m. Then on Saturday, Jan 22, it’s a matchup between the top teams in the GSC as VSU play Union in Jackson, TN.