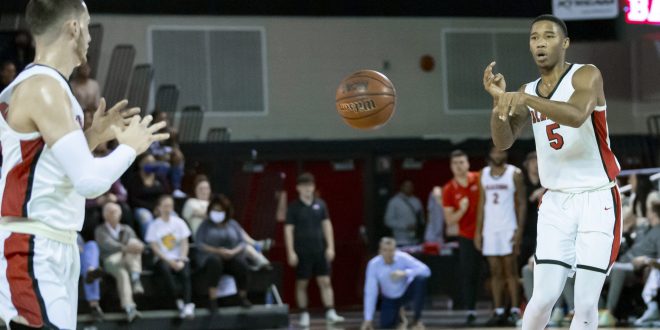 Men’s basketball team split in second half of home stand

The VSU men’s basketball team finished off their three-game home stand with a 2-1 record, beating Alabama Huntsville 87-71 on Feb. 3 and falling to West Alabama 59-57 on Feb. 5.

In their first matchup against Alabama Huntsville since their historic GSC tournament title win over the Mustangs, this rematch was a game defined by big scoring runs.

Early in the game, the Blazers found themselves down 8-2.That’s when the Blazers caught fire, going on a furious 20-4 run to go up 22-12. VSU rode on their defense to make the run possible, forcing three turnovers and a woeful 2-9 shooting during the stretch.

From there, West Alabama went on a short 5-0 run to cut the deficit to five. Unfortunately, that would be the closest the Mustangs would get for the rest of the game.

The Blazers took a commanding 51-30 lead into halftime, outscoring the Mustangs 29-13 over the final nine minutes of the half. In addition, knocking down ten threes, the Blazers went 19-34 from the field in the first half.

The second half started out much like the first half, with Alabama Huntsville opening the half with a 12-0 run to draw within nine. However, the Blazers came up with buckets of their own shut down the Mustangs’ rally.

Down the stretch, both teams traded baskets as the Mustangs tried to crawl back into the game. It wasn’t until the final three minutes of the game that the Blazers were finally able to put the game out of reach, going on a 7-0 run to close things out.

The Blazers had a huge night from their bench players. Freshman, Ricky Brown and junior, Michael Cole combined for 51 points to help give their team a huge boost. Cole also finished with 11 rebounds, giving him a double-double for the game.

Things went much less smoothly for the Blazers in their game against West Alabama.

The game started out slowly as both the Blazers and the Tigers struggled to make shots. Like a bolt of lightning, West Alabama’s Shardarrion Allen gave his team the spark they needed, scoring 11 straight points to help build a 14-9 advantage.

The Blazers answered back to pull ahead of the Tigers 17-16, but West Alabama pulled back ahead to take a 27-24 halftime lead. Despite going just 10-27 from the field in the first half, the Blazers were able to keep up by limiting the Tigers to just 8-20 shooting.

The back-and-forth affair continued into the second half, with the Blazers able to once again pull ahead 39-37.

That’s also when Allen exited the game with an undisclosed injury. He would wind up returning to the game, but by the time he returned to action, the Blazers had taken their largest lead of the game, going up 44-37.

Following another burst of offense from the Tigers to draw within one, the game once again resumed to being a back and forth game.

With the game appearing to head to a photo finish, Blazers once again gained some separation from West Alabama, going on a 7-2 run to go up 57-51. That included a huge step-back 3-pointer from junior, Jacolbey Owens with a defender bearing down on him with 3:25 left in the game.

Unfortunately, the Blazers would not find the basket for the remainder of the game.

The Tigers went on an 8-0 run to close out the game. The GSC’s leading scorer, Kortrijk Miles, knocked down the game-winning shot with three seconds left in the game.

While Miles leads the GSC, Allen did most of the damage in the game, going 8-11 from the field, including 4-6 from 3-point range, and scoring 26 points for the Tigers.

In comparison to most of this season where the Blazers would play fast and shoot threes, the loss against West Alabama saw them take a different approach, with them slowing down the game and taking fewer 3-point attempts. The Blazers finished just 4-11 from 3-point range in the loss.

“We’re not making threes,” Helfer said. “You transition to get threes and we don’t [get threes]. We’re not shooting the three ball. And also, you know, for us, I mean, it’s got to come to something different to try to win games.”

The Blazers will be back on the road next week, taking on Auburn Montgomery on Feb. 10 at 9 p.m. and then travelling to face Montevallo on Feb. 12 at 5 p.m.

Previous Photos: A history of Converse Hall
Next Must See Movies for Valentine’s Day