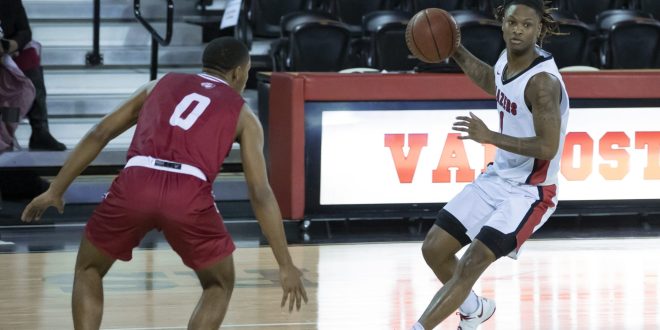 It’s either now or never for the VSU men’s basketball team.

At 11-12 overall and 7-9 in GSC play, the Blazers are in a must-win position should they wish to defend their GSC tournament crown.

With four games left in the regular season, the Blazers are currently a game and a half back from the eighth and final seed in the upcoming GSC tournament and enter their final home stand of the season on a three-game losing streak.

Still, this team has what it takes to keep their postseason hopes alive. It all starts with the strength that is VSU’s depth.

“I feel like we have seven or eight guys that could start every night,” head coach Mike Helfer said.

That depth will be put to the test over their final four games and a potential GSC tournament run. First, however, is starting off on the right foot by building on their 8-2 record at The Complex.

The Blazers’ showdown with the Flames gives VSU a key opportunity to not only strengthen their odds of advancing to postseason play but to also close the gap between the Blazers and the upper half of the conference.

With a win, Lee (third in the GSC standings) and VSU would be separated by just two games. A loss for the Blazers could end any hopes of making the postseason, depending on results from other games in the conference.

While Lee is entering this contest on a two-game losing streak, the Flames have had VSU’s number as of late.

The Blazers lost to Lee in Cleveland, Tennessee, 87-64 back on Dec. 13.  The Flames have also won five straight in the series, a streak that dates back to 2018.

Although Lee’s offense ranks just seventh in the GSC, their defense has been among the best in the league. In addition to being ranked second in the conference on scoring defense at 67.6 PPG, the Flames are also ranked third in blocked shots.

It will be tough sledding for VSU, who has struggled at consistently making shots throughout the season despite averaging 81.1 PPG. The lack in consistency, especially from three-point range, has resulted in Helfer changing the offensive game plan to a slower-paced offense.

“We’re not shooting the three ball at all,” Helfer said. ”It’s got to come to something different to try to win games.”

Unlike Lee, Shorter is not in contention for a postseason berth, having already been eliminated a few weeks ago. However, that doesn’t change the necessity for VSU to beat the Hawks to remain in postseason contention.

The Hawks rank near the bottom of the conference in numerous categories, including both scoring offense and defense, field goal percentage, and turnover margin. Additionally, the Hawks have dropped 15 straight contests to the Blazers.

In their 85-70 win over Shorter on Dec. 11, four Blazers finished in double digits scoring. Junior, Cam Hamilton, and sophomore, Cam Selders, led the charge with 16 points apiece in the win.

Following this home stand is a pair of road games to close out the regular season. The Blazers will first travel to Huntsville, Alabama, to face Alabama-Huntsville on Feb. 22 at 5 p.m. and then go to Carrolton, Georgia, to face West Georgia on Feb. 26 at 2 p.m.

Previous Editorial: Are incentives the driving force for getting vaccinated?
Next Women’s basketball playing for postseason positioning