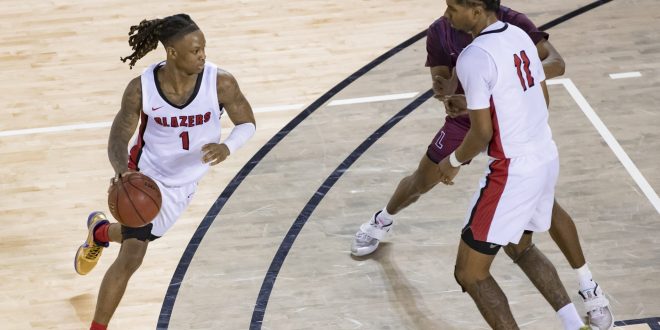 In Jacolbey Owens’ second year playing basketball at VSU, he has blossomed into the Blazers leading scorer, but the 6’1 junior guard plays for much more than points.

“I have three nieces back at home, and they really look up to me,” Owens said. “So every day when I go in and go out, I think of them.”

They certainly have a lot to look up to. This season Owens leads the Blazers in points (14.9), paces the team with 3.9 assists and plays the most minutes on the team.

While Owens is a leader for the Blazers and sits near the top of the Gulf Self Conference in many of those same stats, he isn’t totally happy with the way the 2021-22 season has played out.

“I’ve had a pretty good season but I feel like I could’ve shot the ball better,” Owens said. “My free throw percentage isn’t where I want it to be. I really just want to win, and we haven’t been winning, so that played a big part in my season.”

“I started playing basketball really at the age of ten,” he said. “I played multiple sports, football, baseball, basketball, so I’ve always been an athlete. But basketball really became my favorite sport when I was about 15 or 16.”

After initially playing football, Owens switched to only playing basketball by his freshman year at Warner Robins High School.

He instantly became a household name during high school. In 2018 he led his team to their first ever state championship, knocking down the game-winning shot.

Last year with the Blazers, he was the fourth leading scorer on a team that went 17-5 and won the school’s first ever GSC championship. However, this year the Blazers currently sit at 11-15, outside the GSC tournament.

Being from Warner Robins was one of the driving factors in convincing Owens to come and play for the Blazers.

“VSU is close to home,” he said. “I’m actually from about two hours away from here, so I came here a couple times, saw the environment, the fans, the people, I just love it here.”