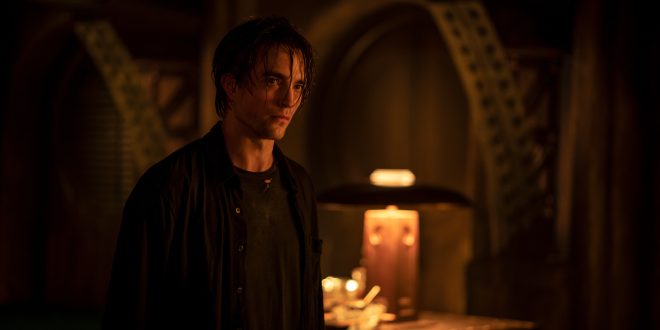 “The Batman” (2022) released in theaters across the country on March 4.

Scoring a 9.2 out of 10 and wearing a glowing review of 87% on Rotten Tomatoes, “The Batman” stars Robert Pattinson. The movie was directed by Matt Reeves, who was the director from “Cloverfield” and the various “Planet of The Apes.” This film has gained popular attention from comic fans and movie fans alike due to the star of the show’s most recognizable role being Edward Cullen from the Twilight films.

Many people have doubted that he would be able to carry the superhero’s torch from the talented Christian Bale from “The Dark Knight” trilogy, or Ben Affleck. However, after being published in costume, the internet collectively threw Edward Cullen out the window in favor of this new and grittier persona.

The movie will have famous DC villains like The Riddler, Selina Kyle, Carmine Falcone and The Penguin. The plot involves The Riddler being narrowed down in the Batman timeline to earlier in the crusader’s career at 30 years old. The Riddler has taken credit for multiple murders of high profile Gotham citizens.

Not yet an experienced vigilante, Wayne is a young insomniac having difficulty differing between his two personas: private and public. The Riddler has a complete overhaul, now reworked as a mixture of The Zodiac Killer and Diehl-Armstrong Collar Bomb case, creating cyphers for the police and leading them down a hole so deep that even The Batman himself can’t escape the pull of.

Affleck’s initial plan was to have the film be shot as a film-noire. However, when the project was handed to Reeves, he wanted to redirect the film to something that would “shake Batman to his core” and began to work while immersing himself in gritty and depressing narratives.

Using the 1970s Alfred Hitchcock’s films, he wanted to amplify Batman’s detective skills by mixing the genre into a child of psychological horror, detective-noire, action and thriller.

Kurt Cobain was used as an inspiration while Reeves wrote the first act, listening to Nirvana’s “Something in The Way.” Reeves wanted to focus on the traumatic past and approach the characterization with a pair of fresh eyes.

“When you’re traumatized at ten, you don’t get a childhood,” Reeves said.

As an interesting mix of genres, “The Batman” pulls it off with surprising and beautiful finesse. There’s symbolism everywhere, if you can find it, and the action never lets up, beginning and ending with scenes guaranteed to keep you on the edge of your seat. The photography and shots are artistically designed, creating a pleasurable visual experience.

A warning to those with epilepsy is advised: there are scenes that take place in a night club and have sequences of flashing lights. Be aware of that beforehand.