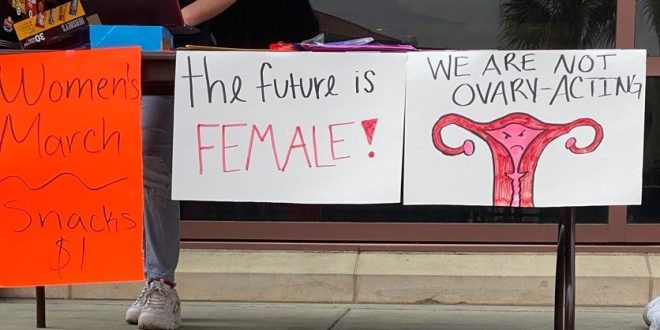 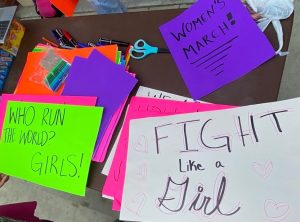 SLG, a multicultural sorority whose mission is to serve the community, provide a safe learning environment and uplift students, puts a special focus on women empowerment while cultivating and embracing diversity.

Jayla Major, a sophomore and the Moral and Ethics Chair for SLG, felt the Women’s March this year was more momentous than ever given that it was hosted on International Women’s Day.

“We’re marching for women’s rights and to show support especially during Women’s History Month,” Major said. “This march is very important for me because I love seeing us all come together and bring awareness to the campus.”

Members of SLG and the VSU community gathered on the Student Union steps with posters decorated with encouraging slogans that read, “Fight Like a Girl” and “Who Runs the World? GIRLS!” while marching along the Pedestrian Walkway and around other buildings on campus.

Jasmin Vasquez, a senior and the Vice President of SLG, joined the sorority after hearing about the previous marches.

“We were [doing] this march [in the past] during the Me-Too Movement to fight against rape culture and what society has to say about women,” Vasquez said. “For me, it was a way to say what’s on my mind and gave me a gateway into the whole organization.”

Although this is the sixth Women’s March hosted by SLG, Vasquez agreed with Major that this year’s march meant even more on International Women’s Day because it provided the opportunity to voice their support for women in society.

“As a society, we see women as the lesser half compared to men,” Vasquez said. “Having a month or even just a day dedicated to ourselves is really great in the sense that we get to show men that we have the same capabilities as they do.”

The event isn’t exclusive to women, though. Vazquez expressed that the more people who come out and support, whether you’re male or female, the better. SLG is all about bringing people of all backgrounds together to support a common cause.

The Women’s March lasted from 11 a.m. to 2 p.m. and the marching itself was spread out in roughly 30-minute increments to give time to any newcomers wanting to make their own posters or buy snacks.

SLG plans on continuing the tradition of this march to further their mission of women empowerment and carry on the legacy of alumni. 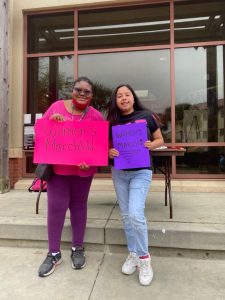 Previous Four must-watch games for the first week of the NCAA Tournament
Next Ukraine and Russia: An Ongoing Crisis