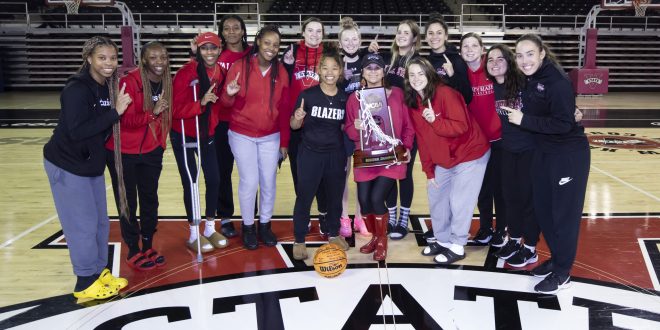 Monday seemed to be the Lady Blazers’ night in Jackson, Tennessee, as they upset the mighty No. 1-seed Union Lady Bulldogs, 66-58 at home in the NCAA Sweet Sixteen.

Maybe it was lady luck, or maybe it was just hustle and heart as every loose ball, every tipped pass, every long rebound seemed to end up in the hands of a Lady Blazer as they punched their ticket to the elite eight.

The last time the Lady Blazers (26-5) made it this far in March was in 1984, and not a single member of this team, coach or player had been born yet. However, they came together Monday night and held the top offense in the GSC under 50 points until the final minute of the game.

Even after allowing a 12-point scoring burst in the final minute-thirty of the game, the Lady Blazers held their opponent to 39% from the floor, much lower than the Lady Bulldogs conference best mark of 47.3%.

Before Monday night, the Lady Bulldogs (28-3) last loss was way back in November, after which they rattled off 24 straight wins, rolling through conference play. They’ve won their first five post-season games by an average of 18.8 points.

The most important piece to the Lady Bulldogs has been the GSC and D2CCA Region Player of the Year, Jaelencia Williams.

While few teams have been able to slow down the dominant 6-2 center, the Lady Blazers have one of the most suffocating defenses, not just in the GSC, but in the whole country.

The Lady Blazers’ 52.9 opponents points per game is the lowest mark in the GSC by five points, and the fourth lowest mark in Division II. Williams had to match up directly with the engine that powers that dominating Lady Blazer defense, Kwajelin Farrar.

Farrar, with the help of fellow GSC first-team member and front-court mate Nicole Heyn held Williams to 12 points on 5-10 shooting, and three turnovers. Farrar on the other hand stuffed the stat sheet with 19 points to lead the Blazers, eight rebounds, three assists, two blocks and a steal.

Heyn was all over the boards collecting a season high 16 rebounds to go along with ten points and three assists.

The game started out with both teams going to their star players inside on the first five possessions of the game. It became apparent early on that double and triple teams would be sent by both teams whenever the ball was posted up.

As the rhythm of the game began to get established Farrar seemed to be more poised on both ends than her opponent in the paint.

As the Lady Blazers opened the first quarter 17-12, Farrar scored eight points and an assist while, holding Williams to four and forcing a turnover.

In the second quarter, the Farrar and the Lady Blazers defense dug in and held the GSC’s best offense to only six points.

Nothing was coming easy for the Lady Bulldogs. They couldn’t even get the easy transition buckets after a VSU miss or a turnover as four or all five Lady Blazers raced back on defense.

The turnovers started hurt the Lady Blazers in the third quarter and the Lady Bulldogs got back in the game; it looked a lot like the last time these two teams played.

It started to feel like déjà vu Monday as the Lady Blazers’ turnovers kept giving the Lady Bulldogs chances to catch up in the third quarter. What started as a 16-point lead was cut to only three with as many minutes left in the frame.

Twice late in the third quarter, Union got the ball on offense down only three points. Both times they came down the floor and did what you might expect the most accurate 3-point shooting team in the nation (39.8%) to do, they let it fly.

Considering it was Bethany Dillard (41%) and Emily Beard (45%), two of the top 30 most accurate shooters in the country (Beard ranks second nationally), most days you’d take that if you’re the Lady Bulldogs.

Not on Monday, not against the Lady Blazers. Both misses were well off-target. Neither were the kind of threes that the Lady Bulldogs had been nailing all season; neither were within the flow of the offense.

But not much was coming within the flow of the Lady Bulldogs’ offense against the Lady Blazers. The team shot 7-25 from deep, and 1-11 when they needed it most late in the third and in the fourth. Dillard and Beard combined to go 2-12 from deep.

Shanique Lucas hit 4-8 from deep for most of her 19 points to lead the Lady Bulldogs. She also played a big role in the Bulldogs’ 12-point late fourth quarter scoring explosion that could have taken the lead.

However, the Lady Blazers hit 19 of their 27 fourth quarter free throws to keep the Lady Bulldogs at arm’s length. The Lady Blazers’ only field goal that quarter came from a Tamiya Francis lay-in with seven minutes remaining.

Francis, a sophomore point guard finished 3-3 from the field and hit four of her five free throws for 11 points. Freshman guard Taylor Searcy has been stellar off the bench for the Lady Blazers in the tournament and she had another 15 points, two assists, and five rebounds on Monday.

The turnovers didn’t cost the Lady Blazers this contest thanks to lock-down defense and cold shooting from their opponent. As they go deeper into march they may not be so lucky, and ball security will be more important.

The Lady Blazers don’t play again until Monday, when they’ll face off against their Elite Eight opponent, 5-seed Western Washington (23-5), in Birmingham, Alabama, with tipoff at 9:30 p.m.