Home / Opinions / The act of queerbaiting: Why is it so bad? 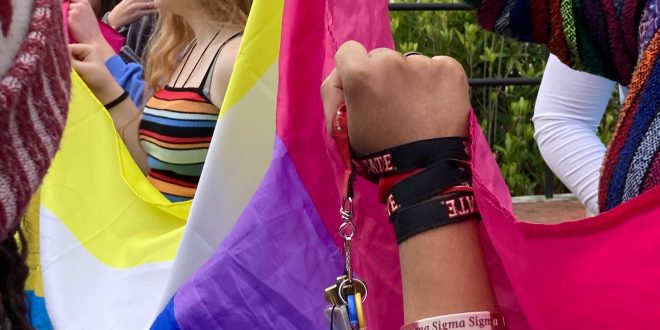 The act of queerbaiting: Why is it so bad?

If you spend any time looking at the Tweets and Instagram posts for your favorite shows and movies, queerbaiting is probably a term you’ve heard before.

Queerbaiting is a trope often found in entertainment industries where creators will allude to an LGBTQ+ character or same-sex relationship without ever depicting it in their content.

It is often used as a tactic to attract an LGBTQ+ audience to a form of media that holds a heteronormative plot line to increase viewership. It allows creators to string along audiences from the community by giving them just enough content to keep them hanging on.

Red herrings, the attempt to temporarily distract the audience from the story, are often found in queerbaiting. Creators will throw in suggestive dialogue or cliché tropes that get audiences thinking something more will be taking place in the show, whether it be the sexuality or identity of a single character or the relationship between two same-sex characters.

Characterization also plays a big role when feeding into this trope. A character who is portrayed with stereotypes often found within the LGBTQ+ community at the start of a show but ends up being heterosexual by the end of it is queerbaiting.

While television, movies and books are the most common places, queerbaiting can be seen anywhere. They are not the only ones. It is often found in stage productions, music, advertisements and social media.

Many popular television shows, movies, plays and even celebrities have been accused of queerbaiting in recent years including:

While it may not seem like a huge deal for some, it’s overall an extremely harmful tactic.

The LGBTQ+ community wants to see themselves portrayed accurately, realistically and meaningfully in popular media. They want to be able to see more than a side character represent them on the screen or page, or a single lyric in a song. When media uses queerbaiting as a way to pull in audiences, it leads people into believing they are finally getting representation outside of a secondary character.

It doesn’t help that demeaning jokes are also used as a form of queerbaiting, such as having two same-sex, heterosexual characters kiss as a form of comedy.

By pulling an audience in to a heteronormative media form by using queerbaiting, creators do away with representation and visibility and feed into the social isolation many queer people still face today.